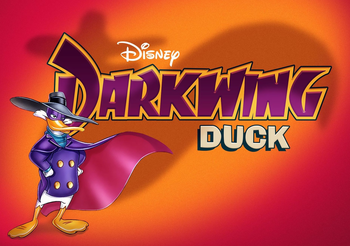 "Let's Get Dangerous!"
"I am the terror that flaps in the night! I am the winged scourge that pecks at your nightmares! I... am DARKWING DUCK!"
— Darkwing Duck
Advertisement:

Darkwing Duck was a superhero cartoon produced by Disney that ran from 1991 to 1992. It followed the adventures of a masked duck, who was somewhere between Batman, Sandman, The Green Hornet and The Shadow, parodying many superheroic tropes and characters along the way. Nevertheless, it was one of Disney's Darker and Edgier series (not as much as Gargoyles, but it did go places that most of Disney's works wouldn't dream of going), fondly remembered for things like total aversion of Never Say "Die" and an episode featuring Satan (albeit a comical version) as the Monster of the Week (though that episode ended up getting banned from syndication).

Armed with only a gas gun and a massive ego, Darkwing battled a Rogues Gallery of villains and defended the city of St. Canard — all while providing his own narration.

Darkwing was comedically inept, hampered by his vainglory, short-sightedness, bad temper, and general klutziness. He always came through in the end, usually after being brought to his senses, and uttering the phrase, "Let's get dangerous," after which he'd really show his true skills. His other catch phrase "I am the terror..." changed pretty much every time it was used. DW always tried to make it fit his current situation, but it didn't always work.

"I am the terror that flaps in the night, I am the batteries that are not included. I am Darkwing Duck!"

DW was assisted by his sidekick Launchpad McQuack, fresh from DuckTales (1987), his adopted daughter Gosalyn, and the youngest son of his next door neighbors, Honker Muddlefoot. He also ran into a number of other heroes, usually not starting off on the best foot due to his own ego issues. These include Gizmoduck from DuckTales (1987), the duck-turned-dinosaur Stegmutt, the fish-turned-person Neptunia, and Morgana MacCawber, a sorceress and former crook who reformed and began dating Darkwing.

Darkwing faced a variety of villains, including the nefarious dimensional traveller NegaDuck, the comical but deadly electropath Megavolt, the plant/duck hybrid Bushroot, the scorned artist Splatter Phoenix, the insane clown Quackerjack, the movie maniac Tuskerninni, and the ruthless F.O.W.L. agents Steelbeak and Ammonia Pine. Also, some evil mind-controlling aliens that looked like hats.

While the show was on TV, several complementary comic stories and illustrated books were released. Some of these were written by the show's scriptwriters and many feature villains not in the show. This all came to an end in 1996 and the license sat dormant until 2010, when Disney revived the franchise with the announcement of a brand-new ongoing monthly comic series, starting with an arc entitled "The Duck Knight Returns", which began in June 2010. The comic ended in November 2011, with a Bat Family Crisis Crossover with the DuckTales comic where Scrooge McDuck and Darkwing join forces against the combined might of their rogues gallery as well as search for the long-missing Gizmoduck. The license then went back into a slumber until February 2015, when all 2010-2011 comics but the de-canonized crossover were reprinted as a trade by Joe Books Inc., rewritten by original editor Aaron Sparrow to better fit the show's tone and featuring a new epilogue. The comic series, continuing from the epilogue, properly started in 2016 with a monthly schedule, but was cancelled again after eight issues.

There was also a well-received video game adaptation released for the Nintendo Entertainment System and Gameboy by Capcom that was effectively a shorter Mega Man (Classic) clone. There was also a TurboGrafx-16 game that was...less well received.

Has its own Shout Out page.

Darkwing was on the voting roster to be in Disney Infinity. He was neck-and-neck with Mabel, but both lost to Olaf, and with Disney's cancellation of the game and departure from the gaming business, only his gas gun and the Ratcatcher managed to make it into the game, as Power Discs.

Darkwing Duck makes some appearances in DuckTales (2017), both as a Show Within a Show of which Launchpad McQuack is a diehard fan and as an actual character. Starting in the second season the character was defictionalized in-universe, and Season 3 included an hour-long special establishing Darkwing as an active hero in St. Canard and reintroducing Gosalyn. In addition to this, the show also incorporated Darkwing's mythology to its plot througth the presence of the agencies S.H.U.S.H. and F.O.W.L. with Bentina Beakley, Scrooge McDuck's housekeeper, being established as a former S.H.U.S.H. agent and F.O.W.L. appearing in as villains in a season one episode and later as the main antagonists in season three, including Steelbeak. Both agencies also feature characters from previous Disney media outside Ducktales in its ranks. Shortly after the crossover, it was announced

that a reboot of the show was being created for Disney+, but no one from the aforementioned Ducktales will be involved, instead being headlined by Seth Rogen and his production company Point Grey. Series creator Tad Stones has stated in an interview

that, though officially retired, he will be consulting on the reboot. As a sort of Production Foreshadowing, Darkwing himself makes a cameo in another Disney Afternoon reboot, Chip 'n Dale: Rescue Rangers (2022) where he is seen complaining about the Rescue Rangers getting a reboot over him.

In January 2018, Darkwing Duck was added as a hero in Disney Heroes: Battle Mode. In a later update of the game, Gizmoduck and Megavolt were added to the roster as well. Both Darkwing and Gizmoduck are also in Disney Sorcerer's Arena (Gizmoduck was added in July 2020).

For another Disney duck superhero, check out Paperinik New Adventures; for a whole team of them, see Mighty Ducks: The Animated Series.

These are the tropes that flap in the night!

Negaduck falls off a building, gets electrocuted and propelled back up by some telephone wires and is hit with a pie held by Darkwing. The process then repeats with a flower pot, an anvil, a safe and a 100-ton weight. Then, Darkwing drives a garbage truck, positions it so that Negaduck can land in the container... and moves away at the last second so that he hits the asphalt instead. Finally, as Negaduck crawls out of the hole he made, the remote control for the electric wall lands on his head and gets broken, deactivating said wall.

Negaduck falls off a building, gets electrocuted and propelled back up by some telephone wires and is hit with a pie held by Darkwing. The process then repeats with a flower pot, an anvil, a safe and a 100-ton weight. Then, Darkwing drives a garbage truck, positions it so that Negaduck can land in the container... and moves away at the last second so that he hits the asphalt instead. Finally, as Negaduck crawls out of the hole he made, the remote control for the electric wall lands on his head and gets broken, deactivating said wall.