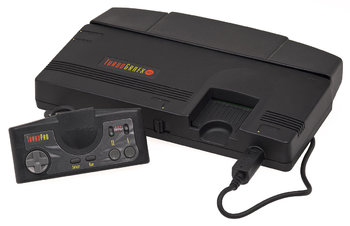 The TurboGrafx-16, known as the PC Engine in Japan, was (sort of) a 16-bit console developed by Hudson Soft and sold by NEC that was released first in Japan in 1987 and in North America in 1989. The system is most noteworthy for being the first console to successfully challenge Nintendo's dominance of the video game market (at least in Japan) and being the first to play games off CDs (via an add-on). Its mascot character was Bonk, or PC Genjin in Japanese, a clearly Punny Name on the system's name.

The most unique characteristic of the system was that the non-CD games did not come on bulky cartridges, but rather on thin TurboChips/HuCardsnote "HuCard" was used in all regions; "TurboChip" was just an alternative name utilized for marketing in the U.S. in a similar fashion to "Game Pak", or "Mega Cartridge" and "MyCard/"Sega Card". These plastic game cards were about the size of credit cards, but slightly thicker, with connectors clearly visible on the end. Although the Sega Master System also used cards in addition to cartridges, they were far less common due to the storage limitations of the format. Furthermore, HuCards are actually descended from "Bee Cards" (as in the bee that appears on the Hudson logo) which Hudson made for the MSX home computer, although a special cartridge was required to use them. The original model of the PC Engine is also notable for its size, being one of the smallest video game consoles ever made at 5.5 in × 5.5 in × 1.5 in.

The PC Engine was the first true competition the Famicom ever saw when it released in 1987, though this accomplishment is typically overshadowed by the more visible success of the Sega Genesis internationally. Not only was the PC Engine a huge upgrade over the Famicom in terms of graphical power, but Hudson Soft was already a developer with a few years of experience in the market, meaning they could supply their console with games. Additionally, Hudson and NEC were respected companies in Japan, so prominent third-party developers like Konami and Namco were very willing to pledge their support and further bolster the PC Engine's library. The system ended up out-selling the Famicom in its first year, and its continued success heavily encouraged Nintendo to develop the Super Nintendo Entertainment System.

The same story cannot be told for TurboGrafx-16, which failed internationally. While the PC Engine launched in Japan unopposed, the TurboGrafx's North American debut was awkwardly timed. It arrived in the region in the same month as the Sega Genesis and was test marketed in the exact same areas. This led to comparisons between the two systems, especially due to the TurboGrafx's misleading marketing campaign falsely touting it as a 16-bit system despite only having an 8-bit processor. Additionally, Sega had heard of NEC's plans to launch the console stateside and had taken proactive measures against the TurboGrafx-16 by airing ads criticizing the console in the areas it was going to be tested in, successfully sabotaging the test market and preventing the console from gaining much foothold. This was not helped by some of the minor inconveniences the TurboGrafx had compared to the Genesis: one controller port, slightly higher price, and the need to buy a $30 accessory for composite video/stereo output at a time when it was rapidly supplanting RF connectors. The TurboGrafx was also bundled with the fairly unremarkable Keith Courage in Alpha Zones. The Genesis may have not caught on fire in North America at first, but it at least had an impressive conversion of the arcade game Altered Beast as its console bundle to appeal to American players.

The other major issue holding the TurboGrafx-16 back in America was its library. 80% of its games never left Japan for whatever reason (most likely Nintendo's near-monopolistic policies regarding third-party developers), negating any advantage it otherwise had with third-party support and generally making it a harder sell. Some titles only got released internationally through overhauled ports for the SNES or Genesis, adding more salt into the wound. While a few games that did get imported managed to achieve some critical acclaim, the TurboGrafx still missed out on big PC Engine titles like Castlevania: Rondo of Blood, Street Fighter II: Champion Edition and Ys IV: The Dawn of Ys.

As mentioned previously, the TurboGrafx was the first video game system capable of running games off CDs. Released in 1988 in Japan and 1989 in the U.S. (three months after the launch of the base system over there), the TurboGrafx-CD (PC Engine CD-ROM2 System, pronounced "CD-Rom Rom" and not "CD-Rom Squared") expansion opened more possibilities for the game library thanks to the extra storage and improved sound provided by the format, especially when backed by the Super System Card. Like the console itself, the CD attachment was very successful in Japan, where it helped prolong the lifespan of the system and kept it fighting against the Super Famicom, which in turn led to Nintendo trying and failing to create a CD drive for their own SNES (and knowing the mess that came out of that, this means you can indirectly thank NEC for the PlayStation). Not so much elsewhere, to the point that only a handful of TurboGrafx-CD games were ever exported. NEC later released the TurboDuo, a TurboGrafx console with a built-in CD-ROM drive along with extra RAM and updated BIOS from the Super System Card. The American release is infamous for being advertised by a comic called Johnny Turbo, which is nowadays regarded as one of the worst advertising campaigns in gaming history. Notably, the CD games are not region locked like the HuCard games, and can be played on any system regardless of language. The fact that the TurboGrafx-CD supported CD audio playback would set a standard of multimedia functionality that most later optical disc-based consoles would follow; as an extra perk, the CD drive could also double as a Discman when unplugged, albeit one that needed a power cord in order to function.

One of the extensions of the PC Engine that was only released in Japan was the SuperGrafx, which added an extra video chip and more RAM to the core hardware. The hardware revision was a complete failure, only having five games exclusively released for it. Slightly more successful was the Arcade Card, released in 1994 in a late attempt to upgrade the capacities of the system; it was mostly noted for its ports of Neo Geo games. That same year, NEC and Hudson Soft discontinued the TurboGrafx worldwide (though in France, it had already been discontinued for around a year). The TurboDuo, meanwhile, would truck on for slightly longer until being taken off of store shelves in 1995.

The TurboGrafx also had its own companion handheld, the TurboExpress (PC Engine GT in Japan). The TurboExpress was able to play the exact same games as the main console due to the small size of TurboChips/HuCards, essentially making it a small, portable TG16 with a screen attached. However, it suffered from very poor battery life due to its power and backlight, manufacturing defects were common, and it came with a very high price tag (US$249.99 at launch). It ended up behind all the competition in the handheld space, selling about 1.5 million units.