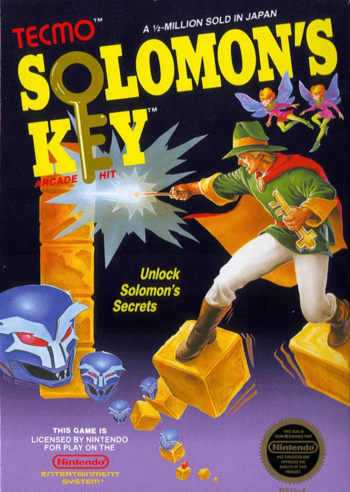 Solomon's Key (Solomon no Kagi) is a Puzzle Platformer by Tecmo.
Advertisement:

The player controls the wizard Dana, who has the magic power to make brown stones appear and disappear in front of him, which can not only help Dana progress through the single-screen levels but affect the movement patterns of enemies and reveal hidden items.

The original Arcade Game was released in 1986, as was a somewhat altered version for the Nintendo Entertainment System. U.S. Gold then released ports for Amstrad CPC, Atari ST, Commodore 64, IBM Personal Computer and ZX Spectrum, which were developed by Probe Software. There was also a Sega Master System version published exclusively in Japan.

A few sequels were produced, some of them dolled-up:

Not to be confused with the IOS game Solomon's Keep.