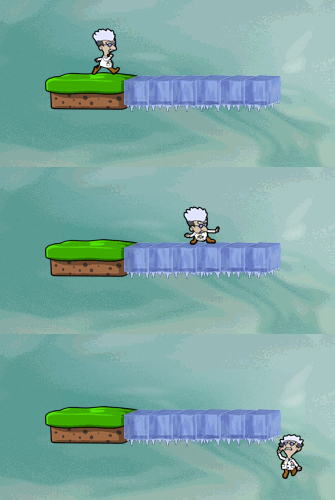 "The ice is slippery. There's nothing you can do about that!"
— Elder Xelpud, La-Mulana
Advertisement:

A Stock Video Game Puzzle. Ice is not merely slippery; it's a physics-defying miracle lubricant that renders characters unable to make the slightest change in direction until the inevitable collision with an obstacle or wall, or in more malevolent circumstances, until the character is sent hurtling down a bottomless pit or into spikes. So much as a single step of forward momentum is enough to send the character, puzzle block, or otherwise significant object sliding three screens in that direction. Of course, there is no diagonal.

This can turn a simple room into a maze, requiring that the player slides from one obstacle to the next until they reach a location that gives them a clear shot (er, slide) to the exit.

Alternately, it can be combined with a Block Puzzle, where the player can move normally (without sliding) but pushing a block causes it to slide frictionlessly until it hits an obstacle, and the goal is to push blocks to hit a Pressure Plate (bridge a gap, etc.) somewhere in the room.

If there are any enemies on or around the ice, don't expect them to share your lack of friction; this includes flying enemies (but them justifiably so).

This trope does not include instances in games where ice simply hinders movement or reduces friction, but rather situations where the main character is unable to alter his course of movement at all once he's hit a patch of ice.