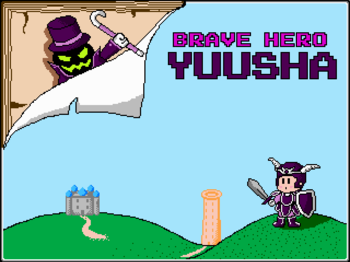 Any similarities to Dragon Quest I are purely coincidental.
Advertisement:

You are a hero summoned by your king to fight a demon lord who has taken your princess. Or so it should be, but that story of “Hero fights Demon Lord to rescue Princess” is suddenly torn apart by the world breaking, due to a mysterious top-hatted individual known as The Puppeteer. He has decided that he can tell a better story and is trying to destroy this one to replace it with his own.

So, to fix the world, you must become a party with Princess Glynn and Demon Lord Volza to set the world right.

It was released free, as just Brave Hero Yuusha, on RPGMaker.net

, and a commercial Updated Re Release, called Brave Hero Yuusha EX was released on 11 Jan, 2019 to Steam