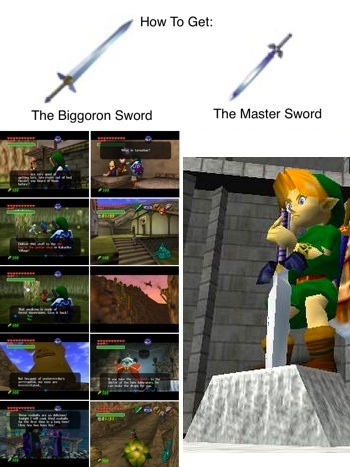 Left: Chain of Deals + Timed Mission = Game-Breaker. Right: Sword of Plot Advancement.
The Heaven Asunder is stupidly powerful. It's not the best sword in the game, that thing takes way too long to get, but it'll do just fine for beating the last dungeon.
—LordHippoman, A Layman's Guide To Ruin Cabbages: Let's Play Rune Factory, "Final Preparations

The Infinity -1 Sword isn't the most powerful weapon in the game, but it's a lot easier to get than the most powerful, and is still decisively more able to lay on the hurt than most other weapons.

Compare with the Penultimate Weapon. That's the sword meant to be the best that you'll always end up replacing anyways. With this sword, you normally don't want to replace it, and if you don't do some special quest, you probably can't. This sword is in fact typically the replacement for the Penultimate Weapon (so the ultimate weapon) when the Infinity +1 Sword is difficult to reach. This sword may be Level-Locked Loot, although if so, the Infinity +1 Sword will probably be much worse.

Likely to be Boring, but Practical, and can often be a Disc-One Nuke as well.