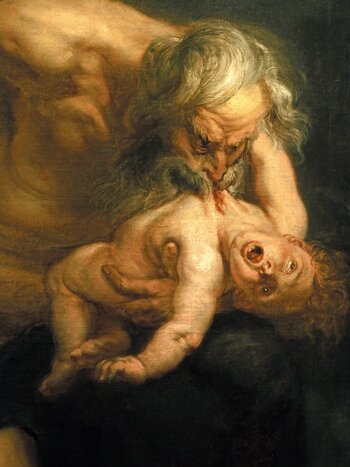 ◊
"I am the Eater of Worlds... and of children!"
— Pennywise the Clown/IT, It
Advertisement:

In folklore, many different kinds of monsters kill and eat children and infants. Others merely make children seriously ill or cause them to vanish (replacing them with fairy changelings). These stories were explanations for the high infant mortality rates seen in primitive cultures.

Naturally, various media use these tales as source material for their own monsters. Some media monsters target children to use them as a slave work-force. Some drain their Life Energy to stay alive.

It is taken as a given that specifically targeting children, especially if you are planning on eating them, is a sure sign that you are a monster in the truest sense of the word. Differs from Eats Babies as this trope covers creatures who go after babies because they specifically target children, while Eats Babies is about villains so evil they would target babies but don't go out of their way to do so. By definition, though, most (but surprisingly not all) Child Eaters qualify for Eats Babies status.

Given how long some of these stories have been around, this trope is Older Than Dirt. Related to Would Hurt a Child. Also see Eats Babies. God-Eating has a surprising amount of overlap, as gods try to eat younger gods.