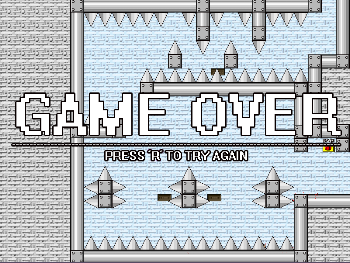 Be prepared to see this. A. Lot!
"WE ARE NINTENDO. WE CHALLENGE ALL PLAYERS. YOU CANNOT BEAT US."
— '80s Australian NES commercial

Back in the '80s, video games didn't have today's sophisticated storylines. Excuse Plots were the norm. Therefore, much of the feeling of accomplishment one could get from playing them was from overcoming the insane difficulty they provided, if only so that one could brag about it to their friends. A plethora of enemies and difficult jumps were not just the name of the game, they were the game. And these games weren't just hard; they were Nintendo Hard!

Since games cost a fair amount of money at the time, and could usually be beaten in 15 minutes if you knew what you were doing, a game that was easy had little value. It was simply not possible to make very long games in the modern style that take hours to beat even if you are good. So games had to be difficult so players would feel they got their money's worth.

Advertisement:
The difficulty of these games usually stems from a combination of factors:

When Nintendo Hard is taken to its most sadistic extremes by deliberately adding cheap deaths and Trial-and-Error Gameplay, you get Platform Hell and/or Bullet Hell.

Keep in mind though, the difficulty of the game might have nothing to do with how the game looks aesthetically, but they're not tailored for young kids either.

When only one or few levels or areas of the game are Nintendo Hard, you're probably dealing with That One Level, Brutal Bonus Level, or SNK Boss if it's the end. If the game reaches an obscene difficulty at a certain point and never looks back, look for Difficulty Spike. Examples of Nintendo Hard head-to-head fighters generally go under The Computer Is a Cheating Bastard, since crazy-hard opponent AI is nigh-universally the culprit. Earn Your Fun is a common argument for those who like such abusingly difficult games.

A lot of arcade games were, and still are, Nintendo Hard for the purposes of encouraging a steady flow of quarters into the machine. The arcade owners have to make money somehow, you know.

Also, remember that by "hard", we're only talking about the difficulty in playing the game. While Nintendo products themselves are physically hard (to break, which is fortunate when playing games like this), that's not this trope but Made of Indestructium. And the fact that several classic Nintendo games are NP-

is not relevant either.

section of GameFAQs is a good measure of a game's difficulty as long as it has a sufficiently large number (50+) of difficulty votes. Games that are rated 4.0 or above on that list represent the top 3% hardest video games ever released. (Note: it is effectively a 2.5-4.0 scale.)

The contrapositive corollary is Sequel Difficulty Drop. Though, contrary to the claims of some derisors, modern games can still be Nintendo Hard, it's just not as common.

When you add examples, please be sure to read the following sentence: If you feel inclined to add the words "for this troper" or "could be considered" and cannot make a strong statement on the universal difficulty of the game in question, then it is not an example. Examples must be games that, as a whole, are extremely difficult even by skilled players' standards.

If you know where an example filed under "Uncategorised" goes, then please sort it.