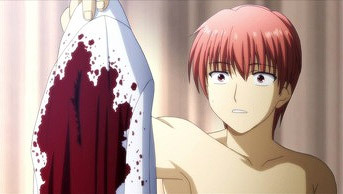 Look on the bright side: You'll find another in a few scenes.
Advertisement:

Blood is always red. Human blood, anyway. This is true even though blood fairly quickly curdles and scabs to a brownish color when exposed to air (because of the oxidation of the iron in the blood; hence the word "Rust" in the trope name), to the point that chocolate syrup is often recommended to fake scabs. Even literary description of the stains, if they are not shown, must specifically say that the stains are of blood in order to be understood. This is probably done as a bit of visual shorthand, to let the audience (and other characters) know that the stains in question are actually blood, as opposed to other things that stain brown, such as mud, chocolate or feces.

A similar error is to have fresh blood dilute when washed from red to a pinkish color. Due to the composition of blood (mostly red cells floating in plasma) diluting it with water actually turns it yellow.

Contrast Black Blood, which is deliberately toned down to spare the audience the harshness of fresh red blood. Bloody Murder is, oddly enough, entirely unrelated.