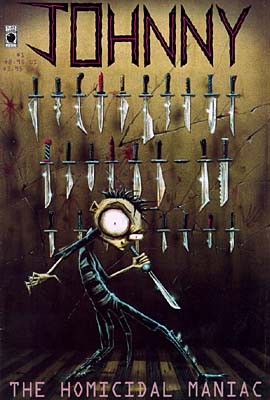 Why are people so... unpleasant?
"Dear Die-ary. Today I stuffed some dolls full of dead rats I put in the blender. I'm beginning to wonder if, maybe, there really is something wrong with me."
Advertisement:

Johnny (Nny for short) is a serial killer with various psychological disorders who does bizarre and often nasty things to bizarre and often nasty people. He often has long, serious, intellectual monologues about the state of society, only to end them with non-sequiturs like "Tuesday is UFO day." When not doing that, Nny likes to draw a comic strip about a deranged, foul-mouthed stick figure named "Happy Noodle Boy." His only friends (if you can call them that) are Todd "Squee" Casil, the meek kid next door whom he unintentionally scares shitless, and Nailbunny, a dead rabbit nailed to the wall who is actually Nny's voice of reason.

Beginning as a segment in the art journal magazine Carpe Noctem, it later spawned a reasonably successful seven-book series published through Slave Labor Graphics, giving Vasquez a modicum of fame in the underground comic world. All seven books would later be compiled and reprinted as JtHM: The Director's Cut. There were also a number of spin-offs, including Squee, a four-book series which later was also collected and reprinted with filler from all eleven books in a separate section; I Feel Sick, which starred Johnny's ex-girlfriend and almost-victim Devi; and Fillerbunny, a deliberately half-assed trio of books spun off from some Squee filler.

In 2013, there was talk of a film adaptation