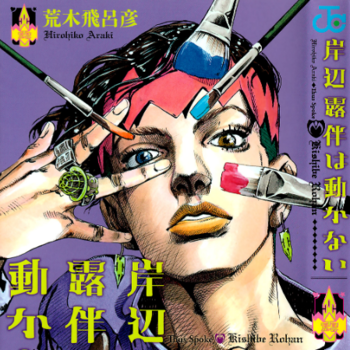 Kishibe Rohan? More like Kishibae Rohan, am I right?
A real live poet came to town; Flossie and all the girls
Fell for his large, dark, dreamy eyes, his Hyacinthine curls.
He talked at teas—they listened, rapt. They petted him to death,
While all the young men stood around and swore beneath their breath.
— Carolyn Wells, writing for The Fortunes of Flossie
Advertisement:

Characters often assume that artists—of any kind—have higher levels of compassion/insight/patience than the "average Joe". By this logic, they will make good spouses. (That a teenybopper writing smutty fanfiction is just as much an artist as Johann Sebastian Bach was will rarely be mentioned.) Bonus points if the artist in question seems tortured or vulnerable. Often, part of a character's attraction to an artist comes from the belief—true or false—that art is a window into the depths of the soul. The artist in question may also be something of a rebel, so this trope can often overlap with All Girls Want Bad Boys. Sometimes, it's not just artistic talent but also eccentricities that may come with said talent that make a character appealing. A male artist may be said to be In Touch with His Feminine Side, especially fine artists and poets, but not always.

On the flip side, a character might try to learn to play an instrument or attempt to appear more creative or artistically talented in order to woo a potential mate. Alternatively, they may lament that they can't compete with someone who can play guitar, or wonder why everyone seems to swoon over that poet over there. Characters may end up competing, either one on one (such as a Dance-Off) or by entering a formal competition (like a Battle of the Bands), in order to win the heart of a love interest. If both characters are artists, they may get closer through Intimate Artistry. Specific subtropes are Elegant Classical Musician, Love at First Note, Dance of Romance, Girls Like Musicians, and the more gourmet examples of Through His Stomach. Subtrope of Inherently Attractive Profession.