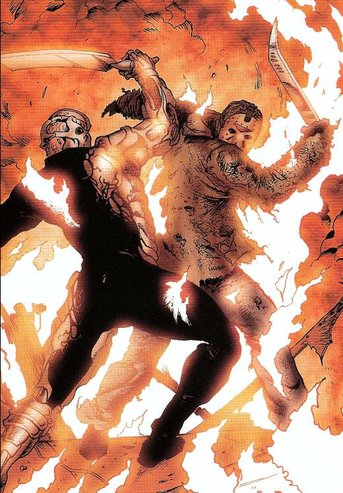 A bunch of Salvage Pirates, which include the comic's protagonist Melda, discover the remains of Grendel in space and board the ship. Due to orbiting trash hitting the wreckage, the head of original Jason Voorhees ends up on the operating nanobot-table that constructed his Uber variant, which proceeds to give it his normal body by pillaging organic matter from the various corpses present from the movie's events. After most of the pirates are killed, Melda escapes on their spacecraft, with regular Jason as a stowaway. They end up in SS Fun Club, a holiday resort spaceship where the cybernetic Uber Jason is already causing carnage. The two Jasons soon meet each other, and start fighting.

Friday the 13th: Jason vs. Jason X provides examples of: