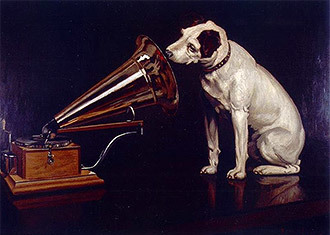 His Master's Voice.
"Your beast cocks its head to one side, the universal animal sign of vague interest. It seems to be listening to you, for now."
— Fallen London, the Labyrinth of Tigers
Advertisement:

Common in Animal Reaction Shots, especially with dogs (although animals who behave like dogs may do it too), accompanied by a Quizzical (or Disapproving) Whimper. Also a common mode of silent expression for The Speechless or The Voiceless.

There's a good biological reason why this trope applies in Real Life: when listening to sounds, brains determine which direction they come from by which ear hears the noise louder and a tiny fraction of a second earlier than the other. If a sound's point of origin is hard to pinpoint, tilting the head and turning the neck moves both ears into new positions, providing additional data from which to triangulate and determine an ongoing or repeated sound's source.

Rubble hurt his paw, so Chase takes over as the construction pup.

Rubble hurt his paw, so Chase takes over as the construction pup.