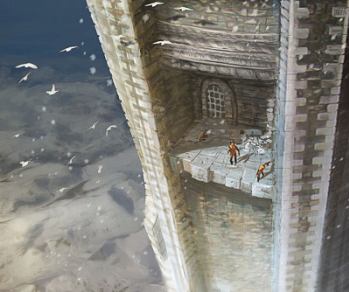 Most prisons have walls and guards. This one is open to the air. In fact, there's open air below it as well. The only way out is through the door or by flying. May be on top of a tower, but that's not necessarily the case. Obviously, this tends to be an example of The Alcatraz, as most settings rarely have people capable of unpowered flight. It's rarely a Tailor-Made Prison, simply because it's a rather generic way of containing people who can't fly. Of course, it is used for prisoners you don't have much need for, as nothing prevents them from easily "escaping". The captors may even count on it.