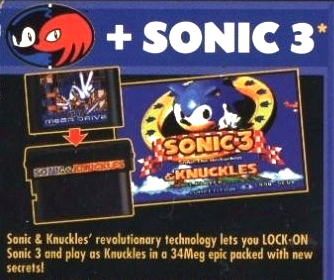 This unique console example required you to physically lock cartridges together.
Advertisement:

Extra material produced for an existing game, either by the game's original production company or by a third party. Expansion packs generally provide a new story line, more levels or maps and occasionally new items, equipment or units.

What makes an expansion different from a new game or a stand-alone game or even a sequel is that you usually need to have the original game installed to play it. The expansion contains more data for the game and does not have a game engine of its own, and it usually doesn't come with the original game. Although a few companies have been releasing standalone expansion packs, which do in fact come with the engine, and allow the gamer to play with the extra content by itself, but having the original game too may have benefits (such as an Old Save Bonus allowing you to pick up with your endgame character, and avoid bag-spillage).

There has been some controversy over the fact that additional purchasable content on some games actually consists of unlocking material which shipped with the original game. While this practice is not exactly fraudulent, and has been employed for productivity software for years (for a commonplace example, Windows Vista's five or so versions are all included on every disc, and the license key determines which features will be enabled), some gamers have felt cheated by being compelled to pay extra for content they already physically possessed.

This is not a new phenomenon. It is said that back in the 1970s, IBM would sell a low-end version of its original 360 mainframe, that if the customer ordered a higher-end version (which cost several thousand dollars for the upgrade), IBM would send out a technician who simply used a clipper to sever one wire. The technicians, of course, were told to behave as if this was a complicated procedure.

Nearly every RTS game ever made had at least one expansion pack. While the older games usually just added bonus missions that were more challenging than the original game, it has become custom to expand the different factions' unit lineup as well as frequently adding new factions to the game altogether.

MMORPGs used to rely heavily on this model and the biggest titles with physical editions still do, either as the sole method of distribution or as an option for those with poor internet connections. Free-to-Play titles deliver most of their content updates online but may occasionally bundle several patches together on a disc in an example of this trope.

Not to be confused with third party self-titled add-ons, which usually just contain maps made with the games map editor (and usually not very advanced either). Third-party add-ons are often (though not always) produced by a game's fan community, and can take the form of extended (or heavily-revised) storylines, additional missions, new weapons, or a 'Total Conversion', which is a time-intensive process that (as the name suggests) converts the game into something else entirely, and usually involves a graphical overhaul, a new soundtrack, and even (in the most extreme cases) new model design and programming extensions (some of which push the game's original engine far beyond its design limitations).

Related to Downloadable Content, which, depending on what and how much they add to their base games, are basically downloaded Expansion Packs. See Mission-Pack Sequel for when developers try to pass these off as entirely new games. (Expansion packs have sometimes been retooled as mission-pack sequels because publishers would rather have stand-alone games to sell to a wider audience, or because the hardware on a particular platform isn't conducive to physically separating the Game Engine from the scenario data.)

These aren't just for video games either; Board Games, and Euro Games in particular, are noted for having a lot of them. See also Source Book.