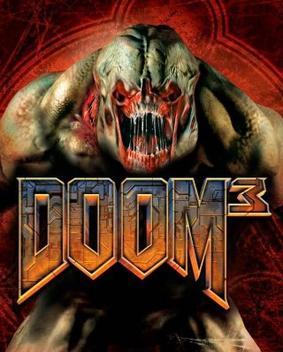 Abandon all hope, ye who enter here.
The Devil is real. I know... I built his cage.
—Johnathan Ishii, moments before his death.
Advertisement:

Doom 3 (stylized as Doom³) is a 2004 First-Person Shooter in the Doom franchise, developed by id Software and released for both the PC and Xbox. Despite its name, it's not a sequel to the original Doom games, as much as a reboot. It has a darker tone than the rest of the series, with aspects of Survival Horror.

Just like in the original game, you're a nameless, silent, badass Space Marine, who has just been assigned to the Union Aerospace Corporation's base on Mars. Upon arriving and reporting to your sergeant, you are given your first task: find a scientist who has gone missing in the old communications facility. At first glance, the place and assignment seem as dull as dirt, but as you speak to other marines and workers during your search, the creepier things start to seem. Many employees seem frightened and paranoid, and then there's the fact that the whole reason you were assigned here in the first place was to replace another Marine who died during an operation. You also overhear some rather suspicious conversations held by a high-ranking UAC lawyer and his lackey, and shadiest of all, the creepy and mysterious director of research Dr. Malcolm Betruger, who promises that "amazing things will happen". By the time you find the missing scientist, things are already creepy enough, but then Hell literally breaks loose, and you find yourself as one of the few people left alive in a base rapidly being overrun with grotesque monsters, reanimated and murderous former humans, and otherwordly, demonic imagery. It's up to you find and stop the source of the invasion, locate and aid any fellow survivors, and fight to stay alive.

An Expansion Pack called Resurrection of Evil was released in 2005, and takes place two years after the original story. In 2012, id Software released the BFG Edition, which includes a remastered and slightly retooled version of the original Doom 3 game (with an armor-mounted flashlight replacing the original's controversial flashlight system, and more ammo), whereas Doom 3 required a fan-made mod for the PC version that to allow a weapon-mounted flashlight. Resurrection of Evil also had an all-new mini-campaign called The Lost Mission (consisting mostly of cut content), plus The Ultimate Doom and Doom II, as well as the No Rest for the Living expansion that was developed for Doom II's Xbox Live Arcade release, making for a very packed Doom experience. Another standalone re-release of the BFG Edition, simply titled Doom 3, was released in 2019 along with the updated ports of Doom and Doom II for the 8th generation of consoles and PC.

The game was adapted into two novels by Matthew J. Costello.

In January 2021, an unofficial port made the game fully playable in VR on the Oculus Quest 2. For licensing reasons, the port requires the user to sideload assets from the PC version. The VR port is based on an earlier unofficial port that moved the game into the Quest's native Android operating system.