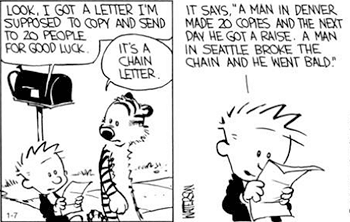 "Chain letters," said the Tyrant. "The Chain Letter to the Ephebians. Forget Your Gods. Be Subjugated. Learn to Fear. Do not break the chain — the last people who did woke up one morning to find fifty thousand armed men on their lawn."
— Small Gods
Advertisement:

Character receives a letter, one which informs the recipient that he must mail it to a certain number of people or suffer bad luck. Though warned by his credulous friends, the skeptical character mocks the very concept of luck and vows to ignore it. Disaster proceeds to befall him on a scale which would make Job from The Bible look like a paragon of good fortune.

Chain letters in real life have nowhere near the credibility that they do in media, and are annoyingly common in e-mail spam and on comment pages and message boards.

Their popularity has varied throughout the years — back in the days of snail mail they weren't unheard of, as information availability was much more limited and therefore ignorance and superstition were much more widespread, but the cost and difficulty of having to physically mail that letter again prevented them from circulating too much. The advent of e-mail made chain letters explode in popularity as all these superstitious and technologically illiterate people were exposed to chain letters that could be widely recirculated by just clicking a button; up until 2005 they were so widespread they were considered part and parcel of having an e-mail account, to the point that people just started mentally filtering them out and entire major websites like Snopes gained their early popularity specifically thanks to debunking chain mails. Big Tech eventually caught note of this phenomenon and started mobilizing their large resources to develop AI-powered spam filters that started blocking chain letters, thus pushing them back into obscurity for the remainder of the decade; but then they returned to popularity around 2012, when people discovered that cell phone text messages and social media outlets like Facebook didn't have any spam police and could be freely tapped for chain letters. This was in turn followed by another still ongoing decline from 2016 to 2020, when social media outlets started applying spam filters to their user-posted content and began promoting the anti-fake-news movement in an attempt to stamp out social media-powered superstition.

Not to be confused with chainmail.