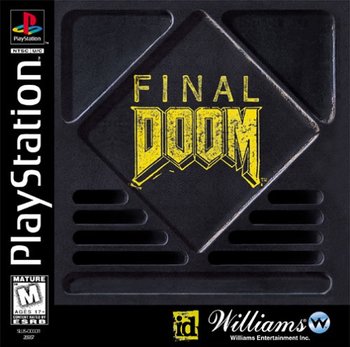 Final Doom is a 1996 compilation of two megawads for Doom II that was published by id Software as an officially licensed Doom product. The first, TNT: Evilution, was originally developed as a free WAD by the modding group TeamTNT, before being purchased by id mere days before its initial release date. id was particularly impressed by two of TNT's contributors (brothers Dario and Milo Casali), and had them create an entirely new set of levels that would become the second WAD, The Plutonia Experiment. Both megawads take place after the events of Doom II, although they're not considered to be canonical continuations.

In TNT: Evilution, the UAC are continuing their research on inter-dimensional travel on one of Jupiter's moons. Their initial experiments go well thanks to an army of space marines managing to keep the forces of Hell at bay. However, the demons soon create their own spaceship to overrun the facility and launch another invasion.

In The Plutonia Experiment, the governments of Earth restructure the UAC to put a stop to any future invasions from Hell. Scientists create a Quantum Accelerator to shut down any Dimensional Gates connected to Hell, but the demons overrun the facility and steal the Accelerator under the command of the Gatekeeper.

In both cases, humanity's last hope once again falls upon the Doom Marine to do what he does best; slaughter the demonic hordes by any means necessary.

A PlayStation port that combined the games into one and included maps from the Master Levels of Doom II was released later that same year. This port removed most of the levels from the combined games (especially on the Plutonia end, where only 6 of its 32 maps were included), as well as the Arch-Vile and functionally the Spider Mastermind (the latter still exists in the game data, just going unused in any of the included maps), in addition to reducing the difficulty significantly. The traditional rock soundtrack was also replaced with more ambient pieces that gave the game a more sinister atmosphere, and included the redone sound effects and colored lighting from the Ultimate Doom + Doom II Playstation port.

On January 9, 2020, both halves of Final Doom were re-released as free add-ons at the launch of the curated add-ons feature for the Unity ports of Doom and Doom II.