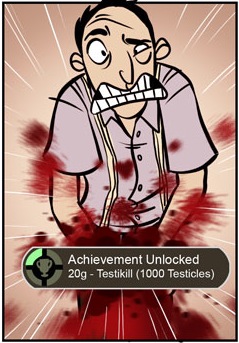 We're the hero in this game?
Brian: What are you playing?
Tim: Tomb Raider III.
Brian: ... She's drowning.
Tim: Yeah.
Brian: Is that the point of the game?
Tim: It depends what mood you're in, really.
— Spaced
Advertisement:

This is the potential a video game has for the player to do awful, horrible things to enemies or even friendly and neutral NPCs.

It can be knee shots causing screaming, telekinesis to literally play catch with guards, punching out scientists, flat-out torture, or many, many other things. Something Awful has dubbed two specific variations of video game cruelty as Asshole Physics and Asshole AI.

Some games specifically cater to this; these often skip out on a Karma Meter. This can also be the carrot along the path to The Dark Side for players in a game with a Karma Meter.

The severity of this trope varies. Some games only let you be cruel to your enemies and give harmless Non Player Characters immunity. (Harmless enemies will still be fair game.) Other games let you torment random NPCs you meet along the way. Still other games give you absolute, unchecked control over your subjects.

In games where there is a level editor or allows a sense of creativity, the trope can be taken up to eleven by allowing those with less constructive intentions to target those of a player character nature just for fun. This can also happen outside of creative games/sandboxes through the medium of joke weapons or modifications/hacking.

This trope is often used for laughs. Remember, though: Just because a game lets you do something doesn't necessarily mean you should do it.

Contrast Video Game Caring Potential — though sometimes helping your little drones means doing horrible things to their enemies... See also What the Hell, Player? and Video Game Perversity Potential. If the game or genre usually does not permit cruelty even though there's no particular in-game reason for that, but this time they do, you have Surprisingly Realistic Outcome.

One of the Acceptable Breaks from Reality. You may laugh at video games, but if someone did this in Real Life? You probably wouldn't be laughing. And if you are, then you're a sick bastard.

This trope is a Super-Trope to the following tropes: (Please make sure that the examples you add do not fit better in one of these.)

For examples where someone takes joy in being a dick to other players, see Griefer.

Note that, since such actions are not mandatory in the story, these actions cannot be considered a Moral Event Horizon or qualify a player character for Complete Monster status.