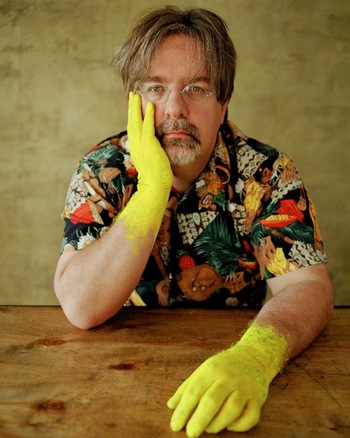 "
—Matt Groening (according to his attorneys)
Advertisement:

Matthew Abram Groeningnote pronounced "GRAY-ning" (born February 15, 1954 in Portland, Oregon) is an American cartoonist, writer, producer, and animator, known as the creator of Life in Hell, The Simpsons, Futurama, and Disenchantment.

Groening began his career in 1977 as an underground cartoonist, with Life in Hell making for his first big break. Influenced by Peanuts, Underground Comics and cult artists like Frank Zappa, Captain Beefheart, The Residents and The Fugs, the comic is perhaps Groening's most personal work. Its central characters are two gay little men called Akbar and Jeff and a white rabbit family. The cartoons already poked fun at topics that Groening would later attack in his animated shows: politics, religion, school, family, work, relationships and modern society in general.

The comic became a cult success, and by the mid-1980s Groening was approached by James L. Brooks to make an animated TV adaptation of Life In Hell. Initially Groening agreed, until he learned that he would lose the rights to the comic strip. So instead, he redrew his rabbit characters as people, named them after members of his family, and that's how Groening came up with one of America's most enduring TV shows: The Simpsons.

The Simpsons started off in 1987 as extremely short cartoons used as bumpers before and after commercials during The Tracey Ullman Show. Despite being crudely animated with lots of Early-Installment Weirdness, the segments caught on with the American public. By 1989 Groening got the chance to turn the series into a full-length primetime animated series, something that hadn't been done since The Flintstones in the 1960s (or, if you want to be anal, since Wait Till Your Father Gets Home in the early 1970s). The show quickly became a critically lauded mainstream success, especially thanks to Breakout Character Bart Simpson (though later, Homer Simpson would be the breakout star and later still, it would be all the ancillary characters).

The show was the first primetime cartoon series since The Flintstones to become popular both with children and adults, being routinely praised for its clever satire, edgy subversiveness (of its time), hilarious gags and emotional depth. Its cult success additionally paved the way for other adult cartoon series such as Beavis and Butt-Head, South Park, King of the Hill, and Family Guy. However, the show wasn't without its critics. Especially in the early years, many parents and educators complained about certain scenes they deemed to be offensive or unsuitable for children. Even President George H. W. Bush attacked the series during the 1992 Republican National Convention by claiming that "the American family should be a lot more like The Waltons and a lot less like The Simpsons." Only a week later, The Simpsons reacted by rerunning an episode and, before the episode proper began, letting Bart say, "Hey, we're just like The Waltons. We're all praying for an end to the Depression, too." Coincidence or not, Bush lost the election later that year.

The Simpsons continued its successful run and is still on television to this day, though many fans believe that the show's quality has long since faded away (thanks, in no small part, to all the Follow the Leader shows that have cropped up and found success — some of which did have former writers of the show itself).

In 1999, Groening launched another animated series, Futurama, around a totally different concept. Set in the far future (and playing out more like a "fish-out-of-water" story mixed with a workplace comedy and a Deconstructive Parody of sci-fi and futuristic pulp stories), Futurama mostly spoofs every science fiction or future dystopia concept in a similar satirical way like The Simpsons. The program never reached Simpsons-level popularity (mostly due to Fox screwing the show out of a potential audience) and was cancelled by FOX, but developed a rabid cult following through reruns via Cartoon Network's Adult Swim block (and DVD sales) and was eventually revived and given a proper ending (albeit left with the possibility of another continuation) on Comedy Central a few years later. In 2022, a second revival, this time on Hulu, was announced.

Groening's third animated series, a very self-referential medieval fantasy spoof called Disenchantment, premiered on Netflix in 2018. Much like Futurama, Disenchantment isn't as beloved as The Simpsons, but it does have its share of fans.

Also worth mentioning: his entire work is very fit for analysis of the Everyone Is Jesus in Purgatory kind. The themes can be interpreted in several ways, though, for the record: Groening is a liberal (in the American sense of the word) and identifies himself as agnostic.

Tropes used in his works: