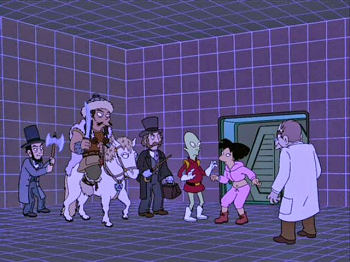 "Real holographic simulated evil Lincoln is back!"
Kif: This is the holo-shed. It can simulate anything you desire, and nothing can hurt you. Except when it malfunctions and the holograms become real.
Amy: Well, that probably won't happen this time.
— Futurama
Advertisement:

Some manner of simulator (whether Hard Light Holograms, a Cyberspace Virtual Reality program, or even just robot mannequins) suffers a Phlebotinum Breakdown. Naturally, said breakdown targets the safety features of the simulator first (rather than, say, shutting the whole thing down) and everything Goes Horribly Wrong, turning the sim, originally intended for training or pleasure, deadly.

A less complicated variant may simply change the Difficulty Levels of the training simulation. The hero got inside for an Easier Than Easy training, and suddenly discovers that he's in a Harder Than Hard (and usually deadly) training. This can be either the result of an enemy hack, or some imprudent dude who saw the Big Red Button of hardest level and asked: "What Does This Button Do?"

The heroes inside the sim may be able to fight their way out, or make the sim release them after a certain procedure (completing the game, most commonly). Sometimes however, all they can do is Try Not to Die while their friends on the outside repair the sim. And this is never as simple as turning off the power. Either pulling the plug would kill the occupants or it turns out to be impossible for some reason.

Sometimes involves part of the simulator software becoming self-aware. For the other common way for simulations to become deadly, see Your Mind Makes It Real. Compare Rescued from the Underworld. Compare and contrast Hologram Projection Imperfection. Compare Refugee from TV Land.