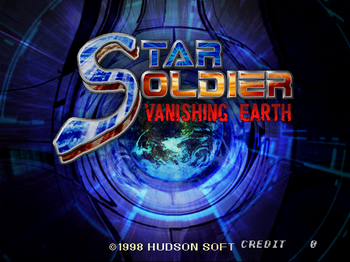 Star Soldier is a line of Vertical Scrolling Shooters by Hudson Soft. The series started in the 1980s as a Spiritual Successor to Tecmo's Star Force. The games are characterized by their distinct power-up weapons and "Caravan Mode" named after travelling video game competitions at the time, where the player has to score as much points as possible (or reach the end) within two or five minutes.
Advertisement:

A Hudson Soft game that could be considered as a spinoff is Hector '87, also known as Starship Hector. It differs from all other Star Soldier games by being set on Earth and scrolling horizontally in its even-numbered stages, but was the first game to feature the 2-minute and 5-minute "Caravan" modes found in the later Star Soldier games.