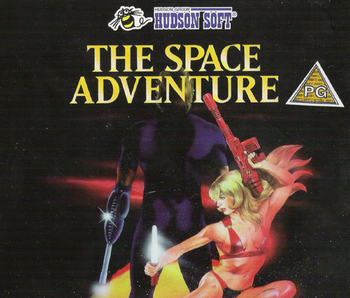 The Space Adventure, developed and published by Hudson Soft Company, Ltd., released in 1991 and known in Japan as Cobra II: Densetsu no Otoko, is the second game dedicated to the adventures of the renegade space pirate Cobra. The game is based on the original manga and TV series by Buichi Terasawa.

While waiting in a bar for his partner, Cobra encounters a beautiful bounty hunter named Jane. Very soon he realizes that the bounty Jane has been hunting for is his own head, for which the Galaxy Patrol has put quite a reward. But everything changes when Crystal Boy, the head of the Pirate Guild and Cobra's archenemy, appears on the scene. Jane's father had apparently hidden a great treasure, encoding its location in tattoos on the backs of his triplet daughters. Crystal Boy wants this treasure, and is going after Jane and her sisters. Cobra and Jane decide to join forces in order to find Jane's sisters and to undermine Crystal Boy's plans.

The game is a Japanese-style Adventure Game. The player advances in the game by choosing various commands ("Look", "Talk", etc.). There are a few places in the game where Cobra dies if the player makes a wrong decision. In the final location the player will also have to fight enemies in turn-based style. The game features a large number of animated cutscenes as well as voice-overs for many dialogues.