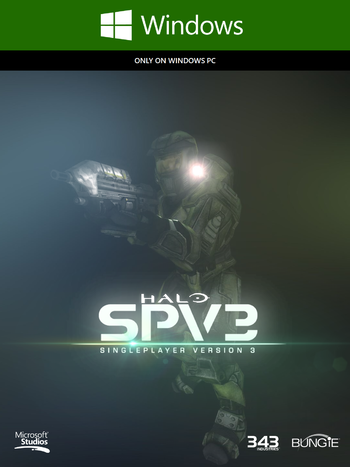 The game that defined a generation - REDEFINED
Advertisement:

SPV3 (Short for "Single Player Version 3") is the third iteration of an extensive campaign modification for Halo: Combat Evolved's Custom Edition for PC. The project presents itself as a "reimagining" of Combat Evolved, incorporating elements from the main series and spinoff games (including some content cut from final release), expanded material such as the novels, and original content including new weapons and expanded levels. The project is spearheaded by Masterz 1337, the head of CMT (Custom Mapping Team) with its remastered and original soundtracks composed by Jafet Meza.

The mod itself is divided into several unique gameplay experiences:

The mod was initially was released on June 2016, consisting of the first half of the Installation 04 Campaign levels (collectively titled Landfall). Future versions of the mod would continue to incorporate additional content:

. You can find more information about the mod on the official Wiki

Tropes applying to the original Halo: Combat Evolved can be found here.

This Custom Campaign provides examples of: