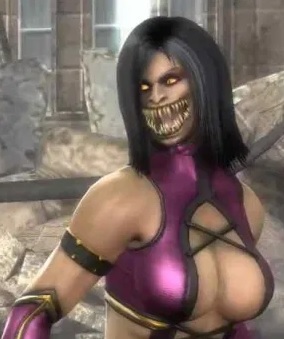 Suppose you see a gorgeous woman walking down the street. Your eyes pan up the long, luscious legs, those beautiful hips swaying oh so nicely, that slim waist, and of course, those bazooms... butter face, somethin' ain't right about 'er face...

In short, everything is great about her but her face! Get it? But her face? Butter face?

This is when a woman is otherwise a total package, but Mother Nature didn't complete the package and she has a face with the shapelessness and sliminess of butter. The kind of face that makes you want to put a bag over it. Often Played for Laughs in cartoons and comedy films. In gags, the woman will often be wearing a Mysterious Veil, setting up for The Reveal. This woman often ends up being an Abhorrent Admirer. Somewhat the opposite of the Gorgeous Gorgon. If a character scores with her, alcohol is usually involved.

Although this is mostly intended for female characters, the trope is unisex. Often overlaps with Fan Disservice.

Also known by the acronym BOBFOC ("Body Off Baywatch, Face Off Crimewatch").

Given the usual attempt for a male observer to get closer for a better look (and looking in exactly the order listed above) this may also be known as "Good from far, far from good".

Needless to say, this is a hugely impolite thing to say to or about another person; for which reason we want No Real Life Examples, Please!

Alternative Title(s): But Her Face