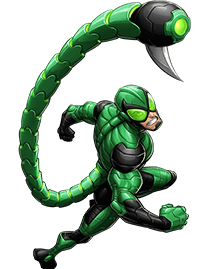 "It counters a Zangoose's dazzling agility with its swordlike tail, which also oozes a horrible poison."
— Pokédex (on Seviper), Pokémon Emerald
Advertisement:

A tail is used for things like balance or grasping objects. Another use is a weapon, which can vary from flailing, whipping, or crushing. It is only logical then that a combatant would add things to make their tail hit harder like a club. Why just hit when you can also shoot stuff or stab with a stinger on the end, which may or may not be venomous? This trope is about weapons on tails, be they natural or not. May cause their opponent to Attack the Tail in order to deprive them of it.

Part of the Anatomy Arsenal. If the tail is tipped with actual biting jaws, see also A Head at Each End. Frequently seen on Scorpion People.