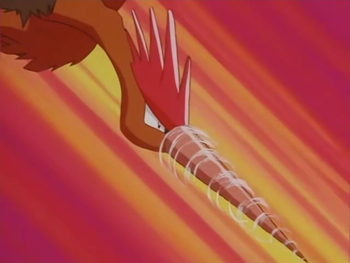 For any reclamations concerning the biological credibility of this image, please redirect your concerns towards Mr. Miles Prower.
Advertisement:

This is when birds and other avian creatures use their beak as weapon for massive damage.

It does not include any time a bird uses its beak; here, this nasty beakering needs to hurt very bad, even if it has to be over the top. Expect people being Impaled with Extreme Prejudice, and the beak somehow acting like a drill or a jackhammer. In Video Games, the bird enemies will often dive at the player beak first, sometimes even being Left Stuck After Attack, helplessly pinned into the ground.

Even though it is largely exaggerated, there is still some Truth in Television behind it. One of the main inspiration behind this trope and its derivatives is the woodpecker, which is able to peck 20 times per second, producing about 10,000 pecks per day, and being able to dig through hard wood to find their prey.

The most likely birds associated to this trope are those with long chiseling bills like the aforementioned woodpecker, cranes, or storks, the long beak even acting like a Sinister Schnoz in case of a villainous bird. When they are small, they could swoon in swarm, acting like a living Flechette Storm. Birds of prey (good or bad) also often use their sharp curvy beak as weapon (which is for once rather accurate). A less common — and more comedic — variant is the use of a large beak (like the one of a toucan) as a literal hammer. Pelicans, despite being quite a deadly hunter, are usually not depicted as offensive in fiction, dedicating their beaks to hide and carry stuff. Expect ornithologists to cry when seeing this trope, especially when it is used by birds not normally able to peck.

The trope also applies to non-bird beaked creatures like pterosaurs (a.k.a. "pterodactyls") and cephalopods, even though it rarely happens for the latter, as they tend to rely more on their Combat Tentacles (at least in fiction), though they may sometimes use an attack that resembles this trope, holding their tentacles out in front of them arranged into a point which they then use to jab and poke opponents with.

Sub-Trope of Natural Weapon. Compare other attacks with body parts such as Horn Attack and Power Pincers, and other avian attacks such as Feathered Fiend, Razor Wings, Feather Flechettes, Absurdly Sharp Claws, and Toothy Bird (who tends to appropriately bite more than it peckers).

The "stingers" of the bee-like foes are located on their head, so they are much more like beaks pecking when attacking Mario.

The "stingers" of the bee-like foes are located on their head, so they are much more like beaks pecking when attacking Mario.