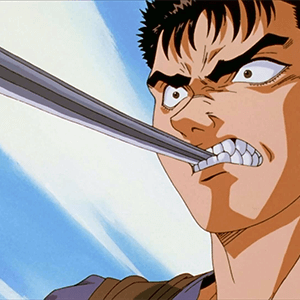 "You know, you talk too much... In battle, there's only one way you should be using your mouth!"
"I am sick of hearing these bullshit Superman stories about the legendary waza Bruce Leroy catchin’ bullets with his teeth. Catches bullets with his teeth?! Nigga, please."
— Sho’nuff, The Last Dragon
Advertisement:

Hard as it may be to imagine, having two hands with opposable thumbs can actually be pretty restrictive. For one thing, everybody knows that you can do stuff with your hands. No one in their right mind is going to do something like point a gun at a person's arm, because you're pretty much just begging them to grab a bullet out of thin air and throw it at you. So once a character is sufficiently strong, he needs a new way to catch an opponent off guard, and that means giving him a third arm. And what better place to have a third arm than with those shiny white things in your mouth?

In terms of story and narrative development, this is a fairly popular method of showing a character as being unbelievably strong—or, at any rate, much better at what they do than pretty much any nameless mook. In actual practice, this is a trope that usually falls strictly under the domain of Rule of Cool. Are there people in the world who can use their teeth to do practically anything? Maybe. Teeth are pretty strong, after all, and can exert more force than a hand. Still, one can't help but wonder how those teeth manage to continue to stay pearly white even after they've grabbed every filthy, dangerous, explosive object under the sun. Ah well. Best not to dwell on it too much.

See Man Bites Man for the other use of the teeth in battle.