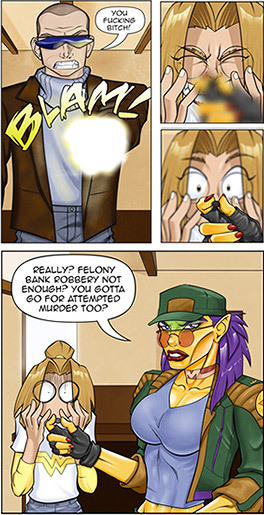 This is a topic which requires no serious debate. Anyone who can actually catch a bullet has to be pretty amazing. We're talking about something which has the ability to cause death to any normal person (well, in Real Life anyway), and here somebody just grabs it mid-air. How unbelievably cool is that?

Even more so than its sister trope, Arrow Catch, Bullet Catch is not even close to something anyone can actually do. Bullets move faster than the speed of sound, and no human has the physical capability of slowing one down with their pathetic meatbag bodies. Even if you could move your hand in time to catch it, your hand is too soft, and it'll simply tear through your flesh.

Note that to a superpowered character, this is a much easier feat, justified in that they have, well, superpowers. Although eventually you have to wonder whether it would be easier to let them bounce off or just avoid them altogether.

Catching a bullet in the teeth, instead of a hand, is a common variant. See Catch and Return for this trope plus a follow up move. Also see this trope's Sword Counterpart, Barehanded Blade Block. Compare Finger in a Barrel.

Exaggerated and justified; Zoom uses his super speed to catch several bullets. He then slowly drops them in front of the horrified police just to rub it in.

Exaggerated and justified; Zoom uses his super speed to catch several bullets. He then slowly drops them in front of the horrified police just to rub it in.