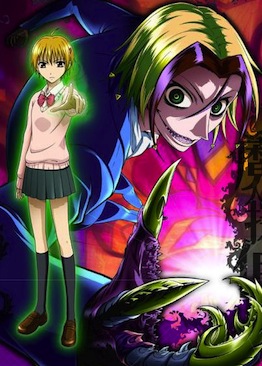 "This mystery is already on the tip of my tongue..."
Advertisement:

Majin Tantei Nougami Neuro (lit: Demon Detective Neuro Nougami, also known as Neuro: Supernatural Detective in the US, but popularly Woolsey’d into Private Evil Eye Neuro Nougami), created by Yuusei Matsui, is a supernatural detective manga and later anime that follows Neuro, a demon who literally eats mysteries. Having eaten all of the mysteries in Hell, he goes to Earth in search of the ultimate mystery. There he meets Yako Katsuragi, a schoolgirl whose father was recently murdered. In order to keep his identity as a demon secret, Neuro sets up a detective agency under Yako’s name, pretending that she is a brilliant schoolgirl detective and he her assistant. With the aid of his 777 Tools of Hell Neuro spends his time solving the murders he deems interesting while, naturally, dragging Yako along with him.

The plot itself bounces between solving the individual cases of one-time murders and much larger overreaching situations such as the mystery of the Phantom Thief X. Perhaps the most distinctive feature of the series is when the culprit reveals his/her true nature and transforms into another form entirely. At this point, Neuro reverts to his demon form and devours the mystery. That said, it should be noted that since any bystanders (Yako excluded) never see Neuro doing this, it can be interpreted as more of a mental representation.