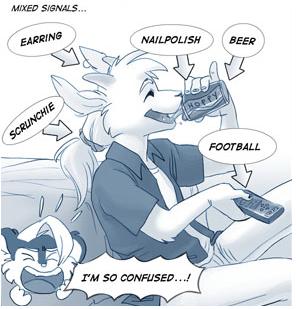 "They're extremely close in an ambiguous way! They're ambiguously gay!"
— "The Ambiguously Gay Duo" Theme Song from Saturday Night Live

A character may have no apparent interest in the opposite sex. They may live in a single-bedroom apartment with one of their "roommates". A male character may lisp, and have an interest in fashion and musicals. He may be unusually fastidious in dress and grooming. Conversely, a female character may have a deep voice and an aggressive manner, dress in "masculine" clothes and play rough sports. However, nobody in-universe will ever discuss the character's sexual orientation.

Yes, this character is Ambiguously Gay—they display many traits associated with gay and lesbian people, but the G- and L-words are avoided entirely in-fiction. Characters such as this are usually played for laughs, with "hints" regarding their sexuality being portrayed as jokes in and of themselves. Often the victim of numerous instances of The Un Reveal. Lately, it has become somewhat popular to make the Ambiguously Gay a child or teenager, waving away the character's questionable sexuality as them still trying to figure it out—yet still playing their mannerisms for laughs.

Because of increasingly permissive censors, and depiction of gay people becoming more common, modern media is somewhat more likely to be explicit in the sexuality of their characters, making it a Broken Trope.

Compare Hide Your Lesbians, where the characters may not act in a stereotypical manner, but their relationships are never outright stated or displayed (except maybe by Word of Gay). The writers in charge of works focused on Heterosexual Life-Partners may play around with this. Ambiguously Bi is, of course, related.

In many old films, characters are often given descriptions that may be perceived as code words for gay. Such words include eccentric, queer, confirmed/lifelong bachelor, or other words that can just as easily mean their conventional definitions without subtext.

Contrast with Camp Straight, which is about a male character having feminine characteristics but being exclusively interested in the opposite sex. Also compare/contrast with Mistaken for Gay, Transparent Closet, and some types of Have I Mentioned I Am Heterosexual Today?, in which the character's dubious sexuality is much more openly questioned. Also compare Real Men Wear Pink, where a character is very manly but has one or two girly interests. Compare Have You Tried Not Being a Monster? for when gay innuendo is used to define something supernatural, such as vampires or mutants. Contrast with Flying Under the Gaydar and Straight Gay. This trope is not synonymous with Ho Yay; nor does the character ever need to be declared gay by the work's creator or creators to fit the definition.