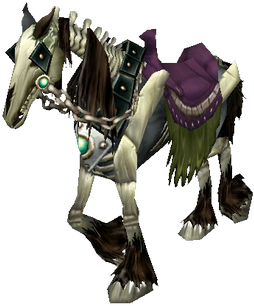 World of Warcraft uses some tropes so much,
they continue into the next world.
"I'm aware it's a cliché
I am aware I'm being stupid, I'm aware of that but hey
This is just something that I gotta do..."
— "Action Movie Hero Boy," Lemon Demon
Advertisement:

Generally, there's a standard progression as a trope ages. First, it is born. Once it has become established enough, parodies, subversions and deconstructions start to crop up. It ends up eventually becoming a trope that no one should dare use seriously (making it a Discredited Trope) and subversions might be common enough to be straight examples of new tropes (making it a Dead Horse Trope). Or it could just be forgotten completely.

Sometimes, however, tropes just don't want to die, and the progression skips a step. Subversions and parodies are common enough to be their own tropes, yet the original trope, even if it's one of The Oldest Ones in the Book, is still in active use and isn't even (universally at least — opinions vary) seen as cliched or corny. It would be a Dead Horse Trope, except it isn't actually dead; it's Undead.

Some tropes that reach this state eventually ascend into Omnipresent Tropes, ones that are more like the building blocks of a story which would severely limit writers' options if they were taken off the market. The majority remain necessities for genre and narrative reasons for which non-cliched explanations have yet to be able to provide a suitable alternative. Sometimes, they persist because of a Grandfather Clause.

Compare and contrast Cyclic Trope; contrast Dead Unicorn Trope (something that's often referenced as though it were a trope, but never actually used as one).

Examples of tropes that haven't quite been killed off: