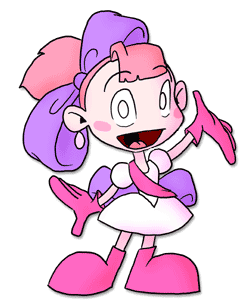 Apollo: Isn't she a little old for cute?
Trucy: Apollo! Shame on you! Cute is eternal! Cute is timeless!
— Apollo Justice: Ace Attorney note  "She" is anything but kawaiiko
Advertisement:

In Japanese, kawaii means "cute", but the concept has far more overtones than it does in English — and far more power. For many Japanese schoolgirls (and some women), being kawaii is kind of like being sexy for Western women: it means that they are desirable, attractive and wanted. It becomes a primary goal in their social lives, and success, as measured in the reactions of their peers, is practically an affirmation of their worth as a woman.

As always, whenever there is a goal like this, there is always someone who overdoes it. The kawaiiko (literally "cute child"), or burikko ("fake child" or "pretend(ing) child"), is the case in point. She takes being kawaii to an almost unhealthy extreme by making it the sole focus of her life. In clothing and fashion, this manifests in frilly, flouncy outfits, often with ribbons and lace. In behavior it appears as a tendency to act childishly "young", particularly in speech — she may speak entirely in baby talk, giggle mindlessly, habitually refer to herself in the third person, and/or use nicknames as well as the -chan Honorific for virtually everyone she encounters. In short, the difference between kawaii and kawaiiko is the difference between "cute" and "cutesy". (The difference between kawaiiko and burikko, however, is the difference between "cutesy" and "obnoxious.")

In some cases, the decision to go kawaiiko is not a desperate plea for social acceptance but a calculated step intended to further a career goal as an Idol Singer — for which lacy, frilly cutesiness appears to be required by the Japanese music industry.

Compare Animesque, Deliberately Cute Child, Manchild (similar trope for men that could also apply to the worst of these cases), The Fake Cutie, and Moe. Contrast Rated M for Manly and Testosterone Poisoning.