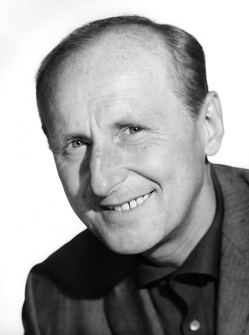 He worked as a baker before World War II, then embraced a stage artist career by imitating Fernandel in cabarets. When imitations of Fernandel became old-fashioned, he shifted to play naive, good-natured chaps, which would remain his famous Signature Style. He came to have a very prolific movie career in the 1950s and 1960s.

His comedic style had the most success when he was paired with fellow big French stars, such as the hammier and more nervous Louis de Funès in Le Corniaud and La Grande Vadrouille, the imposing Jean Gabin in The Trip Across Paris, the more meridional (and longtime idol of his) Fernandel in La Cuisine au beurre or the dashing Jean-Paul Belmondo in The Brain. He didn't limit himself to comedies however, and proved to be equally talented in more serious and dramatic roles, such as Hardboiled Detective Inspector Mattei in Le Cercle Rouge (The Red Circle).

The most famous international production he has appeared in is most probably The Longest Day, where he played the Mayor of Colleville, a Resistance operative who destroys German communication lines and welcomes the Allies on Sword Beach with a bottle of Champagne (and speaks English with a thick French accent).

His stage music career didn't stop even as he appeared in movies, as he also had a successful career as a singer. He performed about 300 songs between 1945 and 1970.