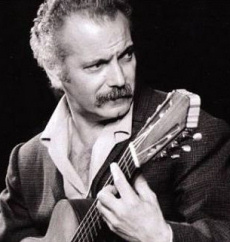 Together with Jacques Brel and Léo Ferré, Georges Charles Brassens (22 October 1921 – 29 October 1981) is considered to be one of the three great names in French Chanson.

Born in a working-class family (his mother was an Italian immigrant and his father a bricklayer), he engaged in petty larceny as a teenager and interrupted his studies early. He spent part of World War II as a conscripted laborer in Germany before going AWOL. After the war, he grew close to Anarchism and tried his hand at poetry, before being talked into becoming a singer-songwriter.

His singing career took off in the early 1950s, and although he published two novels and several collections of poems, he would from then on mostly be known as a singer. His musical style was spare: just his voice, an acoustic guitar, and occasionally a contrabass accompaniment (played pizzicato, jazz-style, to mark the beat). Most of his songs were by himself, though he also adapted in song format poems by various authors: François Villon, Victor Hugo, Louis Aragon, etc. Among his favorite themes were friendship, women, tales of naughtiness, bourgeois hypocrisy, and ridiculing figures of authority.