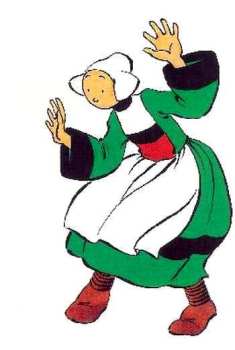 Bécassine is a French comic strip created in 1905, written by Jacqueline Rivière and Joseph Pinchon, originally published in a magazine for little girls, La Semaine de Suzette. It is one of the oldest and longest running comic strips in existence, certainly in France, where it's very well known. Bécassine is so ancient that it predates all other Franco-Belgian Comics by several decades (namely Tintin (1929), whose facial expression originally resembled Bécassine's a lot). From 1905 until 1953, Pinchon's death, more than 27 volumes with Bécassine stories were published. After that the series continued with other artists and was kept in syndication until 1995, making it one of the all time Print Long-Runners!

Despite that the comic strip is fairly close to a regular children's book series, because there are no text balloons and the text is written down beneath the illustrations. Bécassine is also notable for being the first comic strip with a female protagonist. The titular character is a young provincial girl from the French region of Bretagne. She wears traditional clothing and is clumsy, yet has a heart of gold.

A French film adaptation titled Bécassine! came out in 2018, starring Émeline Bayart in the role.