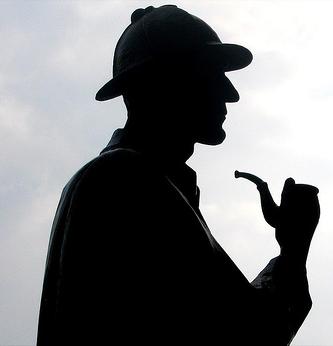 You instantly know who this is, but how often has he actually worn this outfit?note Exactly ONCE, in Silver Blaze
"You're Sherlock Holmes. Wear the damn hat!"
— Dr. Watson, Sherlock, "The Abominable Bride"
Advertisement:

An outfit that, for whatever reason, is considered iconic for a certain character. This can happen even if it's not intended to be embarrassing or funny, but simply a strange fashion choice. The character might never wear it again, nor even anything like it. Maybe the wardrobe people or artists were just bored one day. There's just something unique, inappropriate or just plain odd. Very rarely, the producers are aware of it, and it may become a sort of alternate outfit if a similar situation lets the makers bring it out again.

It can be even more noticeable in a character who rarely wears anything else. Nice Hats and Cool Shades are especially prone to this. Related to Unlikely Spare.

Sometimes the popularity of these outfits make the writers have the character wear the outfit as much as possible. Then you have Clothes Make the Legend, and even Costume Evolution doesn't change the basic form too much.

Some works will have a Beta Outfit before the iconic one is made. Others will use Consistent Clothing Style instead — dress the character in similar outfits across the work, ending up with a more or less iconic fashion sense.

Being remembered for lack of clothing would (probably) be Best Known for the Fanservice.

Compare Iconic Item and Signature Device. If what the character is called is itself derived from the outfit, it's the Person with the Clothing. In the event of a Shallow Parody, the character will be wearing that outfit, no exceptions — that may be the only thing they get right.