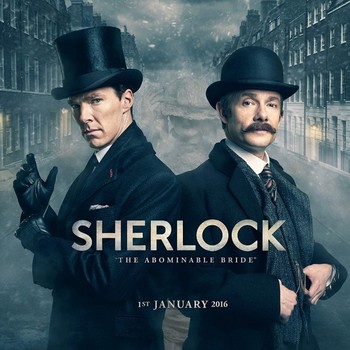 Happy New Year.
"Little use us standing here in the dark. [lights a lamp] After all, this is the Nineteenth Century."
— Dr. Watson
Advertisement:

The 2016 Sherlock New Year's Special. Rather than continuing from the Series 3 Cliffhanger, we are instead transported back to Victorian London, where it all began.

After solving a routine murder case of a country squire, Inspector Lestrade has something much more interesting for the Baker Street Sleuth — a bride murdered her husband right after she committed suicide. Scoffing at the notion of the supernatural, Holmes still takes up the case determined to find a perfectly logical explanation. Meanwhile Mary Watson, frustrated at always being left out Sherlock's and her husband's adventures, begins involvement with the suffragette movement behind her husband's back. But as Holmes digs deeper into the case of the ghost bride, an old case that he long thought had lain to rest comes back to haunt him...