Stay in the Kitchen 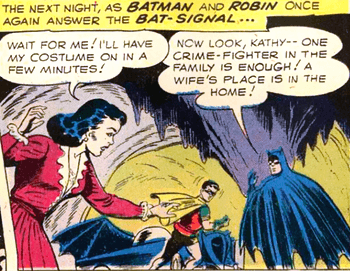 You dick.
Hammond: But you know, I should really be the one going.
Dr. Sattler: Why?
Hammond: Well, because you're a... and I'm a...
Dr. Sattler: Look, we can discuss sexism in survival situations when I get back.
— Jurassic Park
Advertisement:

When a character or the narrative insists that women must be barred from action/office and stay on the sidelines. Never mind if they might be far more capable than men, they're girls, and that's what counts!

Most straight examples of this trope were made several decades in the past. Nowadays, as a result of Values Dissonance, when this trope is invoked, this character is unlikely to be treated sympathetically, if he isn't an outright Politically Incorrect Villain. He may get himself killed when his "protection" does more harm than good, get An Aesop from seeing the girls fight (if it's a one-episode affair), or have the women he's holding back label him as The Load and decide that they should Just Eat Gilligan. Occasionally, the chivalry will be played as sweet and more or less well-intentioned, but still comes off as misguided. Sometimes there will be an unfortunate Broken Aesop wherein our white knight is criticized for suggesting that the women should be protected, only for these particular women to prove that they really did need protecting.

This attitude is prevalent in the real world. The United States military, for example, officially barred women from direct combat until 2013 with The Dulcinea Effect as their reasoning, believing that male troops would be too distracted protecting their female squad members or turn into loose cannon killers if they got hurt, destroying their cohesiveness as a fighting force; they didn't allow women in combat zones at all until the 1990s. Women currently require roughly half of the physical requirements of men, but combat pushes even those men past their ability to contend with. In the Middle East, the male squadmates often must carry the females' packs on long patrols. Current and former female Marines and soldiers seem to approve of the military's consideration of possibly requiring female infantry to pass the male physical requirements.

When it comes to cultural bias, things are less pretty and there is no chivalry involved, especially if this stance comes from male fans unfairly judging female characters. Apart from the usual projection of one's own (bad) experience with women, male fans who use this trope contend that a woman just can't be as badass as a man, just can't achieve anything by herself and that women fighting each other looks too titillating and ridiculous to actually be taken seriously. In short, women's only acceptable behavior according to such fans is Extreme Doormat or else their impact on the story will always be negative.

Even with the plethora of anime and manga series with physically strong female leads, this trope is still seen in Japan, as old gender roles still linger. In the West, the prevalence of more conservative, old-fashioned social mores keeps the number of strong females low, although that is changing. The prevalence of the Girl-Show Ghetto also has its influences.

Conversely, it should also be noted that there are, in fact, women who genuinely prefer to be homemakers and mothers rather than, say, having a high-powered corporate career; this trope should not be used to write those women off as inherently 'lesser'. This trope is about characters who think that all women should fit into this model, not about saying that women shouldn't be allowed to stay home and raise children if they so choose.

Remember that "Stay In The Kitchen" is a Non-Indicative Name; the trope deals not with demands that women cook, but with incidents where men attempt to belittle women (or, although quite rare, protect them) from danger by insisting that they stay uninvolved or only involve themselves on the periphery (and in doing so, act on the tacit assumption that women cannot protect themselves or fight competently). For the version directed at children or otherwise with the assumption that the person's age or experience rather than their gender makes them unequipped to deal with what the speaker is dealing with, see Most Definitely Not Accompanying Us. Subtrope of Men Act, Women Are.