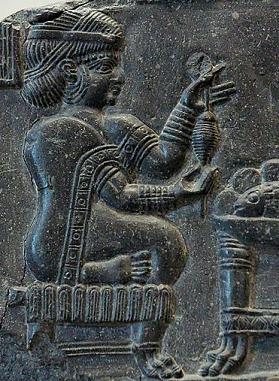 An Older Than Dirt relief of a woman spinning. Note her dress, hairdo and elaborate hassock indicate she is upper class
"She seeks out wool and flax and weaves with skillful hands.
She puts her hands to the distaff, and her fingers ply the spindle.
She is not concerned for her household when it snows— all her charges are doubly clothed.
She makes her own coverlets; fine linen and purple are her clothing.
She makes garments and sells them, and stocks the merchants with belts.
She is clothed with strength and dignity, and laughs at the days to come."
— Proverbs 31, The Bible
Advertisement:

First you got to spin, then weave, then sew — and even then, when you have the clothes, you need to mend and launder as necessary to keep them in good condition. And iron, if wrinkles are a problem. Fancy clothing may require embroidery and lace-making, though that tends to be upper-class. Knitting and crochet can also come into play.

All of these are feminine tasks, undertaken by women and proving them womanly; among well-to-do characters, this is a sign of old-fashioned virtue, especially if other women devote the time to partying, and among poorer ones, a sign of them being thrifty housekeepers. The princess or other lady, handing out The Lady's Favour to the Knight in Shining Armor, often made it with her own hands. This is the source of the distaff in Distaff Counterpart. The Rebellious Princess and other tomboyish female characters are likely to be bad at them, which is generally treated in more modern works less seriously than it was in Real Life.

Female textile work was in fact an economic activity of major importance to the welfare of her kin group given the lack of department stores and ready-made clothes for most of human history. In Imperial China silk woven by the women of the household was used to pay taxes. In Norse folklore spinning and weaving were key elements in woman's magic, seiðr.

The art most frequently depicted is spinning, which is the most time-consuming, and also easily portable and interruptible. This makes spinning, along with other textile arts such as weaving and knitting, very compatible with childcare. With a distaff, a woman can spin with one hand, leaving the other available to aid with nursing. Once a child is past infancy, they can aid in the textile process as well by teasing fleece, carding, and once they reach an age at which they have control of their hands, in the spinning itself. This historical fact is why, until well into the 20th century, textile arts excepting the more labor-intensive activities (such as fulling flax, rope-making, weaving, etc.) were feminine by default. Beginning in the latter part of the 20th century, this convention faded steadily due to a combination of industrialization, the craft movement, and increasing gender equality.

Men - more commonly associated with comparatively masculine metalworking - who engage in such work must pull off Real Men Wear Pink to be taken seriously in most works. Even in Fairy Tales, the tailor is more prone to be a trickster than a dragon-slayer. Compare Feminine Women Can Cook, with the added advantage that it's easy to lug about a distaff or some sewing or knitting and do it anywhere.

The Industrial Revolution was the Trope Breaker, slowly working down the tasks. Though early textile mills relied on a young female workforce, spinning and weaving were among the first things that automation took over. In the 1950s, the Housewife had a sewing machine. Since then, textile arts have seesawed between "cool hobby" (which is where they are now) to "fit only for old ladies" (which is where they were in the 1980s). Naturally, since most writers are middle-aged and grew up in the 1980s, media directed at young males mostly perpetuates the inaccurate (and rather strange) idea that nobody knits anymore. Cue laughter from the five million users of Ravelry.

These days being a Fashion Designer is largely the replacement, though not without carrying over some stereotypes from this trope.

Later, she can assure him that his mother must have loved him on this ground
No little clothes were ever whiter. I never in all my life saw such dainty, fine, little stitches; and as for loving you, no boy's mother ever loved him more!