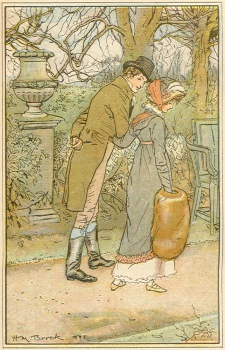 "Let other pens dwell on guilt and misery. I quit such odious subjects as soon as I can, impatient to restore everybody, not greatly in fault themselves, to tolerable comfort, and to have done with all the rest."
—Chapter 48
Advertisement:

Jane Austen's least popular and most controversial novel, published in 1814, a year after Pride and Prejudice. Following the success of that novel, Austen wrote to her sister Cassandra that she wanted to write something less "light, and bright, and sparkling" next time. One thing is for sure: this is the novel where she spends the most time dwelling on guilt and misery.

Mrs. Frances Price, having married a poor naval lieutenant, is shunned by her genteel sisters Lady Bertram and Mrs. Norris and soon finds herself with too many children and not enough money (nor the affection of her husband). Her plea for assistance is answered by her brother-in-law, Sir Thomas Bertram, who secures her eldest son a position as naval midshipman. On the advice of Mrs. Norris, he also adopts the eldest daughter, one Fanny Price. Once at the Bertram home of Mansfield Park, Mrs. Norris wastes no time putting the shy and intimidated girl in her place and instructs Fanny that she is the "lowest and last", who must always be grateful for the charity of her illustrious relatives. The other Bertrams aren't so cruel, but they largely ignore her except to treat her as an unofficial servant.

Eight years of this make Fanny a quiet, timid, passive, obedient young woman who believes nothing could be more unnatural than her enjoying herself or having her needs acknowledged or met. Any kindness practically frightens her since, in her own mind, she doesn't deserve it. The one person who does bother to treat her as a person is her cousin Edmund, the Bertrams' second son. The family's routine country life is shaken up by the new parson's siblings, Mary and Henry Crawford, who arrive while Sir Thomas is abroad on business. Meanwhile, eldest daughter Maria becomes engaged to a rich but stupid young man named Rushworth. Love Triangles ensue when Henry starts flirting with both Bertram daughters and Edmund falls for the unscrupulous Mary, oblivious to the fact that Fanny is silently and deeply in love with him. It's all made worse by a scheme to put on home theatricals with a raunchy and romantic play. Sir Thomas returns, Crawfords leave, and though the play scheme ends, the stage is set for scandal.

All the trademark Austen themes of marriage for love, prejudice against women who dare to demonstrate any independence, loyalty and duty, class differences, pride, greed, and lust, with some new emphasis on the importance of good education and good parenting, are presented via her signature sarcasm and ironic wit. The novel's reputation is not good, however, thanks to the Values Dissonance involved. Along with the Kissing Cousins romance, an offhand reference to the slave trade has caused much discussion on the source of the Bertrams' wealth. Austen was no supporter of slavery, however, and the references are completely tangential to the story, having no effect on the plot. Instead of ignoring them, however, at least one film adaptation in 1999 makes slavery a significant theme.

Well, it was popular enough to be remade as Mansfield Park and Mummies

, and J. K. Rowling liked it enough to name Filch's cat after the villainess: "Mrs Norris, people will have recognised, comes from Jane Austen."

From Mansfield With Love, a modern adaptation in the vein of The Lizzie Bennet Diaries

— the play Tom, his sisters, and friends form a Zany Scheme of performing — makes Austen's wit, sarcasm, irony, and commentary twice as clear (and enjoyable).