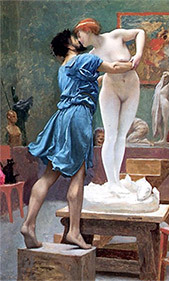 Pygmalion and Galatea
Pygmalion, his offering given, prayed
Before the altar, half afraid, "Vouchsafe,
O Gods, if all things you can grant, my bride
Shall be"—he dared not say my ivory girl—
"The living likeness of my ivory girl."
— Ovid, Metamorphosesnote trandlated by A.D. Melville
Advertisement:

A character has made someone — literally, such as by sculpting a statue, or figuratively, through giving lessons in speech, behavior, or etiquette — and has fallen in love with the creation.

Originally the Greek myth of the sculptor Pygmalion, and his statue brought to life by the gods. Ovid never gave the statue-girl a name, but the name Galatea was given in Apollodorus's Bibliotheca, which predates Ovid. It's Older Than Feudalism, dating to Ovid at least, but most modern versions will probably claim to be more directly descended from My Fair Lady, where the "creation" is figurative — manners, polish, and a new wardrobe. Keep an ear out for references such as "by Jove, I think she's got it!" or "The rain in Spain stays mainly on the plain." However, with the advent of modern Science Fiction, possibilities for Mad Scientists to patch up their own sentient Robot Girls are prominent, and this trope seems to have come full circle.

This is related to Wife Husbandry, but differs because it's not (as) intrinsically creepy. Kiss Me, I'm Virtual is also related, as the creation will rarely have a mind of their own; if they do, expect What Measure Is a Non-Human? to ensue.

Common twists include Pygmalion having his own lower-class past, Galatea not knowing of the bet with Colonel Pickering and reacting badly, and a Beautiful All Along addition.

See also In with the In Crowd, Pygmalion Snap Back, and Teach Him Anger. If the situation is inverted (i.e. the new creation intentionally resembles a long-lost love), then the result is a Replacement Goldfish. Compare also Muse Abuse. Stories featuring The Svengali will usually have a warped version of this plot. The Pygmalion may be the spear counterpart to the manic pixie dream girl in that they both are usually there to help the main character somehow transform their lives. Someone so desperate to be loved that they'd do this might be Love Hungry or Loving a Shadow.