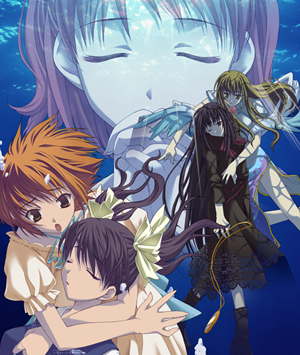 Ever17, the second game in the Infinity series, is a Visual Novel made by the now-defunct studio KID, and was one of the first non-erotic visual novels to be officially translated into English (by a company called Hirameki International, now completely defunct). It tells the story of six (or is it five? Or seven?) young people who are trapped in an underwater theme park called LeMU when it unexpectedly springs a leak. They then have 119 hours to find a way to escape before the place implodes and they all die. It's a little like The Poseidon Adventure, if The Poseidon Adventure were set in the future and had sinister German pharmaceutical companies and some interesting uses of quantum physics. So not much like it at all, really.

The game has two first-person protagonists, each with their own set of paths. The first is an amnesiac boy known only as the Kid; the second is Takeshi, an ordinary college student. Other major characters include Coco, a fourteen-year-old who looks ten and acts about five; You (it's a nickname, not a pronoun, although it's still pronounced "yuu," and not "yo"), a cheerful and friendly employee of LeMU; Sara, an imaginative girl who is a little obsessed with ninjas; Sora, a calm and mature woman who also works at LeMU; and Tsugumi, an enigmatic and unfriendly girl who seems to want little to do with anyone else.

The game is also a huge Mind Screw and possessed of a plot so twisty that any attempt to explain or describe it more thoroughly would, by necessity, involve spoilers. Speaking of which, beware of falling spoilers in the trope examples section; some tropes are big spoilers just by being listed.

Two DramaCD's were made which act as supplemental stories for what occurs after the game's ending. Fan translations of them have been made.

A sort of Fan Translation patch named Ever17 Himmel Edition was released in 2018 in Reddit. It optimizes gameplay for modern PCs, improves the interface and fixes several translation issues from the original Hirameki-translated script. You can download it for free here

Due to the nature of the game, the trope page contains many SPOILERS even after following our usual spoiler policy. If you are the type of reader who is bothered by them, you probably shouldn't look at this page at all before playing the game.

The Xbox 360 remake provides examples of: