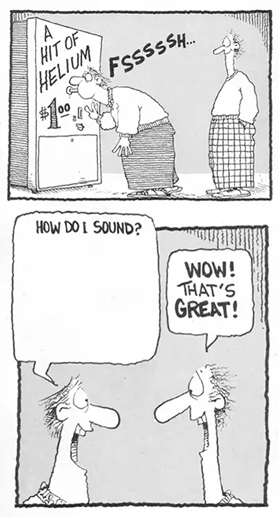 "A mouse in the wainscotting! Well squeaked, mouse!"
— The Doctor, Doctor Who, "The Robots of Death"
Advertisement:

Because helium is lighter than air, when you inhale it and try to talk, the sound waves travel faster through the lower-density gas, resulting in reedy, duck-like voices that can be used to great comic effect. This can be tried in real life, although it should be noted that helium displaces oxygen in your lungs, so breathing it too long can be harmful.

Gasses that are heavier than air, such as sulfur hexafluoride and xenon, have the opposite effect, resulting in a temporarily evil- or gruff-sounding voice, but this rarely appears in fiction probably because the gas is less widely known. They're also a lot more dangerous; for obvious reasons, it's easier for a heavier-than-air gas to build up in your lungs than a lighter-than-air gas. Unless you're standing on your head.

Because it is easy, plausible in many settings, and can be very funny, helium voice often shows up in fiction.

It should be noted that contrary to popular belief, helium actually changes the timbre (as in the quality) of one's voice, not the pitch. Regardless, those who favor the easy and cheap way of getting things done or just didn't do the research still go for artificially pitch-shifting the characters' voice in spite of this tidbit.