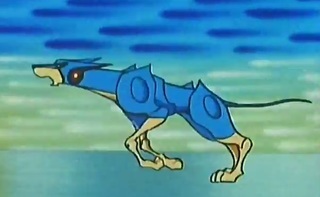 Dr. Light: Behold! my greatest invention! Rush, the robotic dog!
Mega Man: What? A robotic dog? What's so great about that? Does it transform or something?
Dr. Light: A transforming robotic dog? Of course! Absolutely brilliant!
— Bob and George

Robots are cool. Dogs are cool. Put them together and you get a Robot Dog!

Makes for both an excellent Cool Toy and Robot Buddy, as well as a playful Canine Companion. Usually overlaps with Cute Machines and Fun Size if they're based on Precious Puppy, because why not?

Sometimes, Robots Are Just Better, and this applies to robot dogs too, since they tend to have better intelligence over their living counterparts. Most robot dogs made for consumers also lack aggressiveness of most living dogs, making them fall under Benevolent A.I. and Cheerful A.I. territory. Some robot dogs are also animated plush dogs, thus making them a robot dog version of Everything's Better with Plushies.

A poorly-designed robot dog can result in Uncanny Valley, or become a Funny Robot when Played for Laughs. If it breaks down, you need a Robot Master or a Wrench Wench to help fix it soon.

If the Robot Dog is an Angry Guard Dog or a Hell Hound, on the other hand, be very afraid.

Are You a Good Dog?

In "LazyTown's New Superhero" from "LazyTown," Robbie Rotten's latest scheme is inventing a robotic dog which goes nuts whenever anyone says the word "trouble."

Are You a Good Dog?

In "LazyTown's New Superhero" from "LazyTown," Robbie Rotten's latest scheme is inventing a robotic dog which goes nuts whenever anyone says the word "trouble."