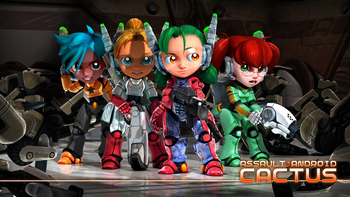 "When you're running on battery, make every second count."
— Tagline from game website
Advertisement:

Assault Android Cactus is a "twin-stick" Shoot 'Em Up note (like Smash TV or Robotron2084, each player is able to independently move and fire in different directions) by the indie developer Witchbeam, based on characters created by Tim Dawson, the creator of the webcomic Dragon Tails.

The eponymous Cactus, a junior Interplanetary Police constable, has been dispatched to stop a robot uprising on board the enormous spaceship Genki Star. As soon as she crash lands aboard, she and the motley crew of other androids she's able to find are forced to battle hordes of killer robots.

Unusually, although each character has their own Life Meter, Death Is Cheap — players can recover in a few seconds of mashing the fire button. The important thing is the battery: once it runs out, it's Game Over — and the only way to recharge is with a power-up dropped after defeating enough enemies. This encourages aggressive play.

Combined with the wide variety of characters with different play styles, along with levels that dynamically transform and gameplay bordering on Bullet Hell, the game has been winning a following from both media and gamers ever since it was made available on Steam's Early Access program in 2013 after winning Intel's Level Up game demo contest.

The completed PC version is now available for Windows, Linux, and Macintosh OSX. The developers planned to release the finished game for Wii U, Playstation 4, and the PlayStation Vita in 2016, but were only able to release the PS4 port. An Xbox One (X) version was released on November 2017, and a Nintendo Switch version was released on March 2019.