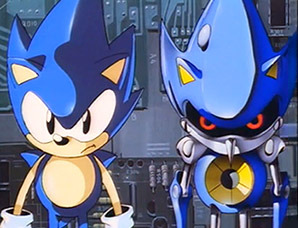 The Evil Knockoff is what happens when the Big Bad decides that he could finally beat that frustratingly tenacious hero if only he had... his own, personal, mindlessly loyal copy of the hero! This is based on the theory that there's something about the hero personally that makes them unbeatable. (Big Bads do tend to obsess about this stuff.)

For a character to be an Evil Knockoff, it must be a copy created at least partly for the purpose of defeating The Hero in combat, on the principle of fighting fire with fire.

In the least justified cases, the Big Bad produces an obviously mechanical copy with superficial visual resemblance to The Hero but little functional similarity; for example, a robot "copy" of a human ninja could rely on hidden machine guns and rocket launchers. This prompts the question of just what talismanic property of the hero's appearance is actually getting copied into "Mecha-Hero." The reason why is some absurd and never clearly articulated theory that "nothing can be as strong as the hero but the hero- or something that kinda looks like him!"

In more justified cases, the Big Bad knows strength when he sees it, and so makes sure the copy shares some basic capabilities or power source with the hero, or is an actual clone. If The Hero is already mechanical or otherwise manufactured (i.e. an engineered Super Soldier), the copy will usually be based on that hero's original blueprints or other stolen underlying technology, be reasonably close in appearance and capabilities, and fight in a nearly identical fashion, resulting in a battle of wits and spirit instead of the more usual Aesop that copies are never as good as the original.

Some villains don't stop with just one Evil Knockoff, and Send in the Clones to produce a small army of Evil Knockoffs. Thanks to Conservation of Ninjutsu, these clones are usually not quite as good as the original, but make up for that via sheer numbers.

Often a form of Mirror Character and Laser-Guided Tyke-Bomb. Sister Trope to Evil Twin (evil identical twin), Evil Counterpart (evil character with similar abilities and/or history who took another path), and Criminal Doppelgänger (evil Identical Stranger). Related to Mirror Boss (where a video game features a boss fight against an opponent with abilities similar to the player's) and Sixth Ranger Traitor (where a new recruit for the hero team turns out to be an enemy). Often, whole teams being cloned results in The Psycho Rangers. If the knockoff turns out to be the manifestation of the hero's inherent evil side, it's an Enemy Without. Contrast Psycho Prototype, where the hero is the "Good Knockoff". This may backfire on the bad guy if he Copied the Morals, Too, and the knockoff winds up inheriting the good guy's morality/heroic tendencies.

Example of:
The Psycho Rangers