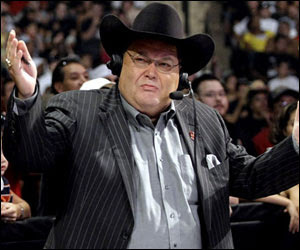 Good Gawd almighty
You gotta be kitten me.
"It's a Slobberknocker!"
Advertisement:

James William Ross (born January 3, 1952), a.k.a. "Good Ol' JR" or just "JR", is one of the greatest (and most beloved) commentators in the history of Professional Wrestling having provided commentary for the WWE for almost 20 years (and having worked for several other promotions, including WCW prior to starting with WWF/E, and New Japan Pro-Wrestling after his unceremonious firing from WWE). He is also close friends with "Stone Cold" Steve Austin.

Outside of wrestling, he sells his own brand of barbecue sauce, has written cookbooks, and opened a barbecue restaurant.

He's semi-retired from commentatin' — though he does come back every now and then. Ross returned to the broadcast booth part-time in 2016, calling matches for NJPW on AXS (a tape-delayed show that's intended to showcase NJPW matches to American audiences). In his spare time, he also runs a website

that peddles his own brand of condiments and barbecue products, and he also offers a regularly updated blog about current events in wrestling and even boxing, MMA, football and other sports.

After his final WWE contract expired in late March 2019, Ross signed a 3-year deal to become a "senior advisor" for All Elite Wrestling. It wasn't initially clear whether he'd return to the commentary table, but he would later be revealed as the lead play-by-play announcer for AEW's first major event, Double or Nothing, in May 2019. Ross also brings a world of other backstage experience, especially in talent relations.

He was inducted into the WWE Hall of Fame in 2007.