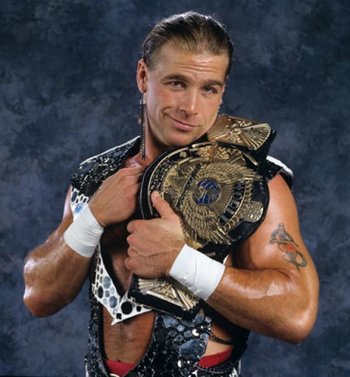 The Heartbreak Kid. The Show Stopper.
"He is simply the best. He can [make] anyone look great. He creates a story from his bumps and moves. But it's a double edged sword. He can even make someone look foolish with his sheer ability. Hulk Hogan learned that."
—James Ferrarella

The Showstopper, the Main Event, the Headliner, the Icon!

Michael Shawn Hickenbottom (born July 22, 1965), better known by his ring name Shawn Michaels, is an American retired professional wrestler, actor, and television presenter. He is one of the longest tenured performers in WWE history, having worked with the company until his 40s.

Trained in Mexico by José Lothario, Michaels first achieved notoriety in the American Wrestling Association (AWA), where he founded The Midnight Rockers with Marty Jannetty in 1985. After winning the AWA World Tag Team Championship twice, the team continued to the WWE (then WWF) as The Rockers and had a high-profile breakup in January 1992. Within the year, Michaels twice challenged for the WWF Championship and won his first Intercontinental Championship, heralding his arrival as one of the industry's premier singles stars. He would wrestle consistently for WWE until a back injury forced his first retirement in 1998. He performed in non-wrestling roles for the next two years, and returned to the ring with WWE in 2002 and retired ceremoniously in 2010, before being assigned as a trainer in 2016. He returned for a final match in 2018.

In the WWF/WWE, Michaels closed the company's flagship annual event, WrestleMania, five times, and was the co-founder and original leader of the successful Power Stable D-Generation X. He is a four-time world champion, having held the WWF Championship three times and WWE's World Heavyweight Championship once. He is also a two-time Royal Rumble winner (and the first man to win the match as the number one entrant), and as of 2019, Shawn is a twice-inducted member of the WWE Hall of Fame (Having been induced individually, a year after his retirement, and as part of D-Generation X's group induction) and was voted the greatest superstar of all time by the WWE roster. He is currently hosting a hunting show on Outdoor Channel called MacMillan River Adventures

and helping train the next generation alongside his partner Triple H in NXT.

On a tangential note, Michaels is one of the members of The Kliq — essentially the Rat Pack of pro wrestling — who had the run of WWE for a few years, and ultimately pulled the trigger on the Monday Night Wars, with Michaels and Triple H founding D-Generation X in the WWF and Kevin Nash and Scott Hall founding the nWo in WCW (alongside Hulk Hogan), with remaining Kliq member Sean Waltman appearing on both (as Syxx in WCW and X-Pac in WWF/E).note Michaels would later appear on the nWo's WWE incarnation, albeit not on a wrestling capacity.

As Shawn Michaels mocks Montreal for screwing Bret Hart, Bret shows up to confront Shawn. Or does he?

As Shawn Michaels mocks Montreal for screwing Bret Hart, Bret shows up to confront Shawn. Or does he?