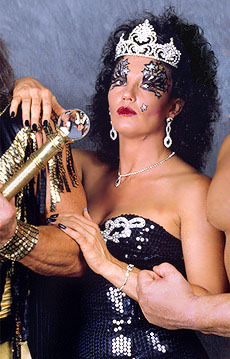 Sherri Schrull, née Russell (February 8, 1958 – June 15, 2007), known by her ring name Sherri Martel, was an American professional wrestler and valet most famous for her work in WWE.

She previously wrestled and valeted in the AWA, where she gained notoriety as a Jezebel who would do anything to win a match. In the WWF, she won the WWF Women's Championship from The Fabulous Moolah, was fairly contemporaneous with Miss Elizabeth, and focused more on valeting after dropping the title. Most famously linked with Randy Savage after he turned heel, and also spent time with "The Million Dollar Man" Ted DiBiase and Shawn Michaels. (She also sang his theme. Well, sort of.) She eventually went to WCW to work with Ric Flair and Harlem Heat.

DiBiase inducted her into the WWE Hall of Fame in 2006, the second woman to receive the honor. She died one year later of a prescription drug overdose.

No relation to Rick "The Model" Martel, even though the two of them were involved in a storyline in the WWF. Neither one's real name is Martel, anyway; they're both stage names.